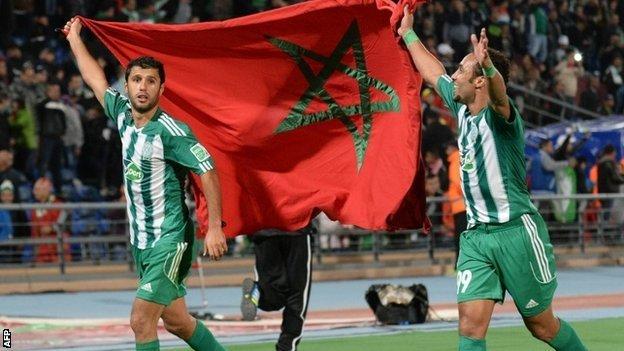 The Moroccan champions, who lost out to Bayern Munich 2-0 for the club world title in December, got their continental campaign off to a flying start thanks to four goals from Mouhssine Iajour, and one each from Abdelilah Hafidi and Abdelkabir El Ouadi.

Libyan side Al Ahly Benghazi also started the preliminary round in impressive fashion with a 4-0 win over Foullah Edifice of Chad in Tunis.

Despite playing away from home due to security concerns in Libya, Ahly dominated through Zimbabwe import Edward Sadomba, who netted twice.

The former Dynamos forward broke the deadlock on 26 minutes, before Abdelrahman Fetori doubled the lead from the spot 10 minutes after the break.

Kabuscorp of Angola thumped Cote d'Or of Seychelles 5-1, while Royal Armed Forces of Morocco drew 2-2 with Real Bamako of Mali.

Kaizer Chiefs made a winning return to the competition after a nine-year hiatus as South Africa's representative, with a 3-0 win over Black Africa from neighbouring Namibia. Chiefs, who needed a good performance after rivals Orlando Pirates reached last year's final, missed a host of chances to increase their winning margin.

Zamalek of Egypt beat debutants AS Douanes of Niger 2-0. Zamalek are aiming for success in this year's competition to make up lost ground on local rivals Al Ahly , who have been African champions a record eight times. Defending champions Ahly have been given a bye to the first round proper.

Nigeria's Enyimba fought hard to produce a 3-1 home win against Togolese champions Ange de Notse. The confidence of two-time winners Enyimba had been boosted for the game by a recent win at an invitational tournament involving Nigeria's top four clubs.

Berekum Chelsea had reversed a decision to pull out after they received a $20,000 lifeline from the Ghana Football Association. The club, who reached the group stage of the 2012 Champions League, have grappled with financial problems since their main financier relocated to Canada.