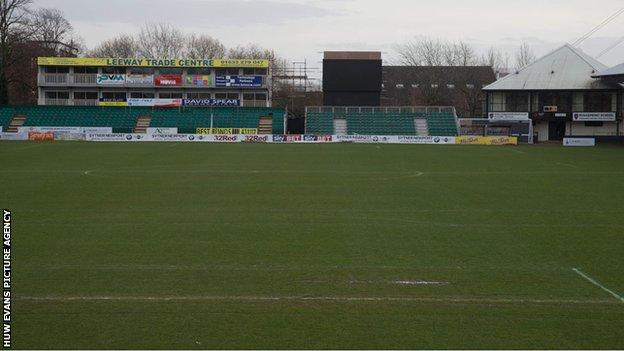 Newport County claim to have lost £180,000 in gate receipts after having five of their last six home fixtures postponed.

Friday night's League Two match against Fleetwood was the latest victim of the weather.

And there are already doubts about next Tuesday's home game against AFC Wimbledon at Rodney Parade.

"It's devastating for everybody at the club, frustration is not the word," said chief executive Dave Boddy.

"It's killing us on all fronts - on the cash flow front we're now £180,000 down just on the gates for the five games we've had postponed.

"On the football front obviously all the momentum we had going into the Christmas period, when we were in the play-off places has gone, so it's just devastating and depressing."

Boddy also revealed that they had tried, but failed, to get the match with Wimbledon switched to Kingsmeadow.

"We talked to Wimbledon today about the possibility of reversing the fixture, whilst they did say that they would look at the suggestion they weren't confident they would be able to accommodate that," added Boddy.

County share the Rodney Parade Stadium with the Newport Gwent Dragons who are due to play Edinburgh in the Pro 12 League on Sunday.

That match is subject to a Saturday morning pitch inspection.

And with heavy rain forecast for South Wales, County's chances of playing on Tuesday evening are already looking remote.

Drainage improvements were started on the pitch in the summer of 2013, but were not finished before the start of the football season.

They are expected to be completed in the summer of 2014.