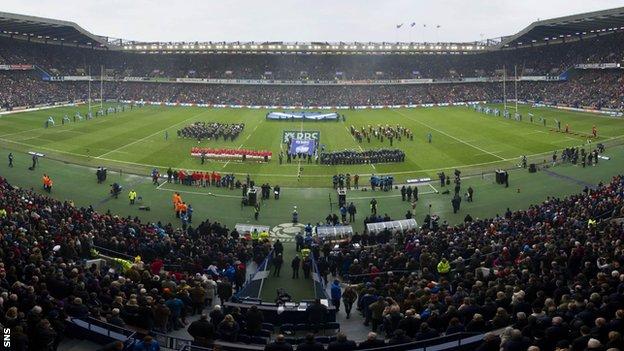 Celtic will play European qualifiers at Scottish Rugby's Murrayfield next season should they qualify as expected, BBC Scotland has learned.

Celtic Park is being used for the opening ceremony of the Commonwealth Games in July.

Neil Lennon's side are currently 21 points clear at the top of the Scottish Premiership.

Any request by the club to play a Champions League fixture in either England or Ireland next season by European governing body Uefa.

Their rules state that Champions League matches must be played "either at the ground of the home club or at another ground in the same or another city within the territory of its association".

Murrayfield, which hosts Scotland's home international rugby matches and Edinburgh's home games in the Pro12 and Heineken Cup, has previously been used as a venue for football.

Hearts played European home ties at Murrayfield between 2004 and 2006 as their Tynecastle pitch was deemed too small for Uefa club competition.

Scottish Rugby will soon replace the Murrayfield playing surface with a hybrid grass.

in a bid to eradicate nematodes, roundworms which cause damage to grass root structure.

And Edinburgh's upcoming home Pro12 match against Ospreys on 28 February has been moved to Boroughmuir's Meggetland ground.