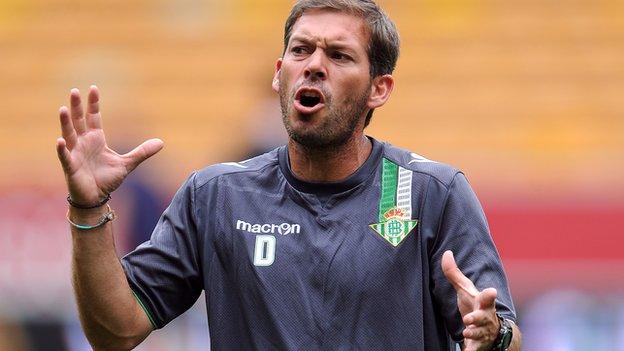 Gomez previously worked with Mel at La Liga side Real Betis until they were sacked in December.

And after initially been ruled out as a candidate when it became clear he wanted to bring his own backroom staff, Mel has now got his own way.

Mel gets his man

"It makes perfect sense for Pepe Mel to have someone he inherently knows and trusts, a friendly face, working for him in a foreign country.

"He made it clear when he signed up with the Baggies that, long term, he would want Gomez, and another former Betis coach Roberto Rios, to join him in England.

"It may be no coincidence that Gomez reportedly speaks excellent English, which will undoubtedly help Mel put his tactics across to the Albion squad."

Gomez's appointment will help Mel, 50, who is not yet fluent in English, but Keith Downing remains assistant boss.

Mel, appointed as head coach on an 18-month deal following the sacking of Steve Clarke on 14 December, explained: "David was a colleague in Spain and I think it's good for the club, the players and for me that it's been possible for him to join us.

"Keith Downing remains my number two. I am very, very happy with Keith. He's a very good assistant and a very good person.

"Every day that I've been here, Keith has helped me get to know West Brom and the Premier League better."

Gomez has joined Albion until the end of the season, with Downing and goalkeeping coach Dean Kiely continuing in their roles.

Albion's sporting and technical director Richard Garlick said: "Pepe is working in a completely new environment and we've always been open to the idea of him strengthening his backroom staff with someone he knows well."

Gomez left Real Betis along with Roberto Rios following Mel's sacking on 3 December, to be replaced by Juan Carlos Garrido.