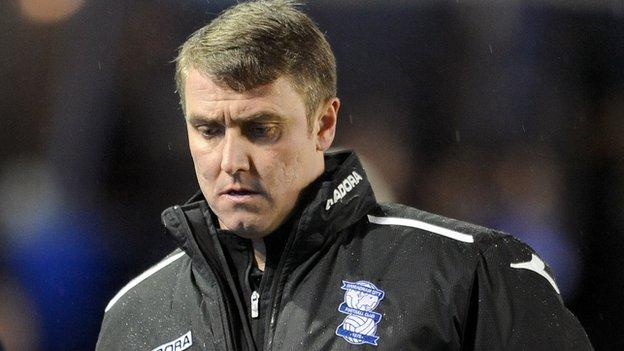 Birmingham City boss Lee Clark insists that he still has the heart to succeed in his tough job at St Andrew's.

Clark, 41, has not had it easy since becoming manager in June 2012, having one hand tied behind his back in every transfer window, as a result of the Championship club's financial worries.

But he told BBC WM: "I'm still enjoying it here. "I'm proud to be the manager.

"To hear the reaction we got from the fans on Saturday reinforced the belief that I'm at a really special club."

Blues' last-minute equaliser in the 3-3 home draw with Derby County, from one of his six January transfer window signings, Federico Macheda, was a happy ending to a particularly fraught month for the former Newcastle United midfielder.

And this week's revelations from Hong Kong that troubled owner Carson Yeung has severed all official command of the club and that Blues' parent company Birmingham International Holdings Ltd (BIHL) are trading again, could prove some light at the end of the tunnel.

But, when asked if he was still up to the continued challenge and ever felt like walking away, Clark insisted: "That never came into my head.

"But," he added. "I won't tell any lies and say it wasn't extremely tough. January was an awful month.

January was an awful month. I won't tell any lies and say it wasn't extremely tough

"Coming on the back of a 10-match unbeaten run on New Year's Day, then suffering three league defeats on the bounce, not to mention getting ourselves in a winning position against Swansea City in the FA Cup, then not going through.

"Then having to wait until the last two days to get the squad up to strength."

Added to that, one of those six signings, on-loan Manchester United defender Tom Thorpe, was stretchered off just 14 minutes into his debut against Derby and has had to return to Old Trafford for treatment .

But, going to Saturday's crunch clash with Charlton Athletic at The Valley, Clark insists that he is still optimistically looking to a bright future at St Andrew's.

He added: "I want to be the manager here the day when it turns around and we are challenging at the right end of the Championship and getting the club back where it belongs, in the top level, back in the Premier League again."