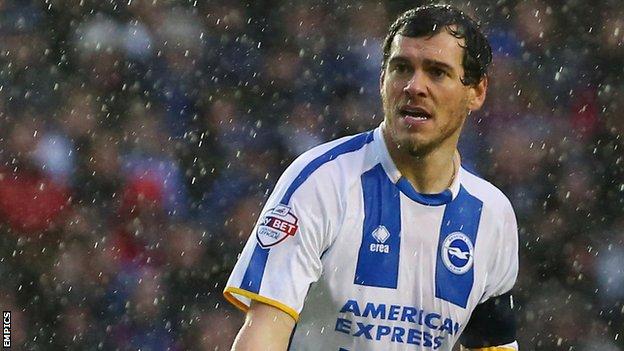 Brighton captain Gordon Greer says they must take advantage of a run of games at home if they are to challenge for promotion from the Championship.

The Seagulls are seven points off the play-offs but their next three league games are at the Amex Stadium.

"To keep in touch we are under no illusions that we need to pick up points and fast," he told BBC Sussex.

"If you look over the course of the season we have dropped points at home to the so-called weaker teams."

The Seagulls have only won five of their 13 home league matches this season; drawing with bottom-half sides Sheffield Wednesday, Bournemouth and Millwall and losing to relegation-threatened Barnsley.

Brighton's home game against Doncaster on Saturday is a repeat of the first ever league match at the Amex Stadium in August 2011.

Two late goals from winger Will Buckley secured a 2-1 victory for the Seagulls.

"It was such a special day for everybody connected with the club," Greer told BBC Sussex.

"The supporters had waited so long to get the stadium they had always dreamed of.

"Doncaster came and it didn't look like we were going to get the points but Bucks produced two goals at the end and we got the points.

"It was a great day all round."

Brighton's last four games in all competitions have been away from home, and the Seagulls have picked up a total of one point from trips to Derby, Burnley and Watford.

"It's been tough, playing against some good teams, so we are delighted to have a few home games now," 33-year-old centre-back Greer added.

"The away games were disappointing but we gave it everything.

"We are in with a good shout this season and it is up to us to keep the momentum going and hopefully the club can keep progressing."

Meanwhile, Scotland international Greer says it may take time for Brighton to adapt to the ins and outs during the transfer window, as well as having to deal with injures to midfielder Andrew Crofts and wingers Will Buckley and Kazenga LuaLua.

The Seagulls sold forward Ashley Barnes and midfielder Liam Bridcutt and missed out on winger Craig Conway, who had a loan spell with Brighton earlier this season but joined Blackburn Rovers from Cardiff.

The Sussex club did, however, sign midfielder Dale Stephens from Charlton while also bringing in forwards Jonathan Obika and David Rodriguez.

"We have missed Bucks, Kaz has been injured, Crofty has been out, Craig has gone back to Cardiff and Barnesy went," Greer said.

"There have been a lot of changes throughout the squad and you are going to miss players like that.

"Barnesy was doing really well and has left. We have lost a lot of players and obviously Crofty as well.

"It will take a bit of time to replace these players."