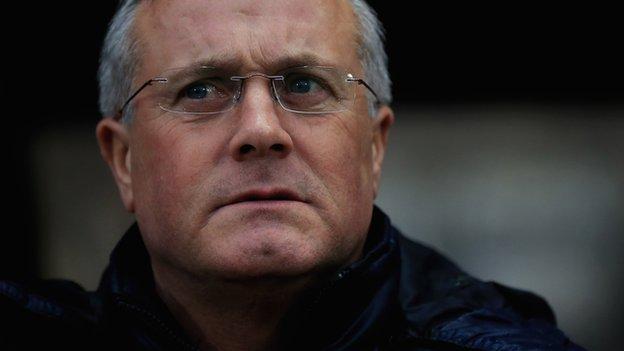 Port Vale boss Micky Adams says that he has not yet been offered a new contract by the League One club, even though his current deal expires in June.

The 52-year-old Yorkshireman's future at Vale Park has become a source of major speculation among fans worried that they might lose him.

"Because people put deadlines on you and they want answers, it will continue to grow," he told BBC Radio Stoke.

"But I have not seen a contract. That situation has not changed."

The much-travelled Adams, who turned out for Gillingham, Coventry City, Leeds United, Southampton, Stoke City , Fulham, Swansea City and Brentford as a player, has continued to clock up the miles in his 18 years as a manager.

After being used as player-manager at Fulham, Swansea and Brentford, followed by a short spell as caretaker manager of Nottingham Forest, he has since managed Brighton (twice), Leicester City, Coventry City, Vale (twice) and Sheffield United.

And, when he led Vale back to League One in May, two years after returning for his second spell, it was the fourth time he had built a promotion-winning team, this one perhaps the most impressive achievement, in a season when the club were undergoing a takeover,

Adams' current deal, along with 14 of his players, is due to run out in June, five years after he first came to Burslem.

And owner Norman Smurthwaite has already insisted, in the wake of speculation to the contrary, that the popular Vale manager is going nowhere.

But, at a time when he has led his side to ninth in League One, Adams remains adamant that no deal has been placed on the table.

"I had not seen a contract when this question was last asked me two weeks ago," he said. "And I've still not seen one now."