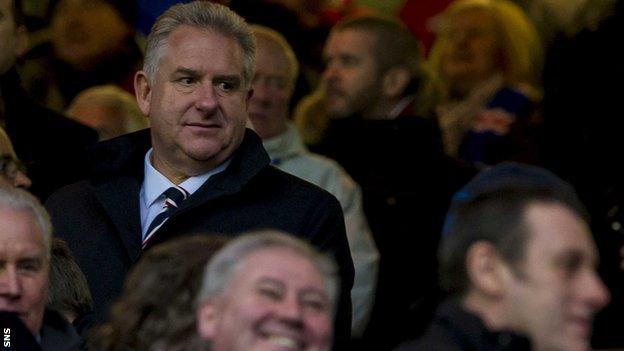 Rangers chief executive Graham Wallace has refuted "ill-informed and inaccurate" claims that the club is on the brink of an insolvency event.

The Scottish League One outfit have received calls from concerned supporters and shareholders following posts on a prominent online blog.

Unchallenged, ill-informed and inaccurate comments are damaging to the reputation of Rangers

Though manager a reduced salary, a proposed 15% wage cut until the summer.

In his statement on the Rangers website, Wallace said: "The club has received many calls in recent days from fans, shareholders and other interested parties with regard to the contents of an Irish-based internet blog which has published numerous allegations about the business affairs of Rangers Football Club.

"The club wishes to make clear that these allegations are totally inaccurate and that the chief executive and board of directors are fully focussed on the restructuring and rebuilding of Rangers Football Club as previously announced.

"The club has decided to make this statement as unchallenged, ill-informed and inaccurate comments are damaging to the reputation of Rangers Football Club."