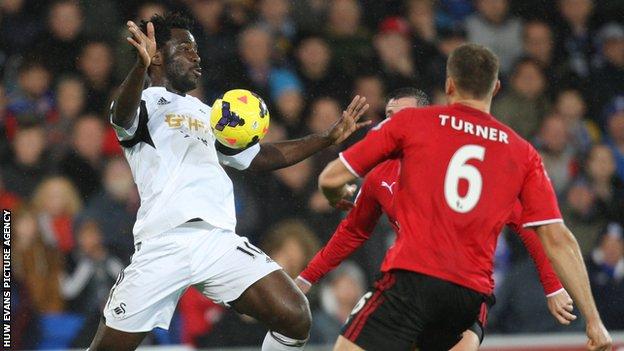 Cardiff City manager Ole Gunnar Solskjaer says Swansea striker Wilfried Bony will be one of the main obstacles to the Bluebirds making history in the south Wales derby.

Solskjaer's side will complete the first-ever derby league double if they win at the Liberty Stadium on Saturday.

Bony has averaged a goal every two games for the Swans in all competitions this season.

Solskjaer says the Ivorian is a dangerous player his side need to watch closely on Saturday.

"When he [Bony] turns he can shoot from anywhere on the pitch, right foot, left foot.

"We've seen proof of that quite a few times.

"They [Swansea] look to use him in the build-up play.

One Cardiff player who could be tasked with trying to shut out Wilfried Bony is defender Juan Cala.

The Spaniard is in the squad for the match following his move from La Liga side Sevilla.

Cardiff won the first ever Premier League clash between the bitter rivals in November.

Yet there is more than local pride at stake on Saturday.

The Bluebirds are next to bottom in 19th place in the Premier League and Swansea are 12th just three points above them.

It will also be the first game in charge for Swansea's new manager Garry Monk.

Club captain Monk was appointed following the sacking of Michael Laudrup on Tuesday following a poor run of form.

"It'll probably be a different kind of Swansea," said Solskjaer.

"Garry will probably stamp his authority on his team, that's the way every new manager is."

New Cardiff striker Kenwyne Jones said his side need to win the derby more than Swansea and Solskjaer agrees.

"We are burning to create history. It's an important game for us."