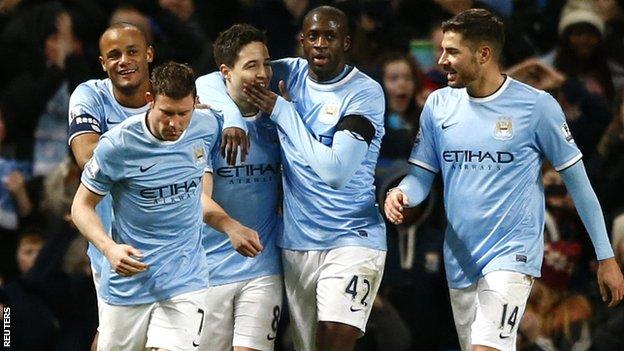 Manchester City exacted their revenge on a Chelsea side that has beaten them twice in the Premier League this season with a convincing win that puts them in the quarter-finals of the FA Cup.

Stevan Jovetic and Samir Nasri scored the goals that keeps City's dreams of a quadruple alive and the winning margin might have been even more emphatic on a miserable night for Jose Mourinho's men.

If Mourinho's previous visit to Etihad Stadium - a 1-0 victory at the start of February - was a tactical triumph for the Blues boss, then this was something similar for his City counterpart Manuel Pellegrini, who enjoyed only his second success in 10 managerial meetings between the pair.

"I think Chelsea will be very disappointed with their performance. In the end it was a comfortable win for Man City, who were much, much better. They were solid and denied Chelsea time and space throughout. You have to say, City thoroughly deserved their victory."

In truth, the result was rarely in doubt as soon as Jovetic gave City the lead with a fine low finish in the 16th minute.

Chelsea managed just three efforts at goal in the 90 minutes: hopeful shots from distance from Willian and Cesar Azpilicueta that were well off target, and a late Gary Cahill header which was blocked.

With the in-form Eden Hazard shackled by James Milner and Pablo Zabaleta, the Premier League leaders looked short of ideas and City's defensive diligence meant Chelsea never got the chance to break forward in the manner that had proved so decisive in their last meeting.

City began cagily, operating in their usual 4-4-2 formation but understandably wary of committing too many men forward because of their opponents' threat on the break.

That all changed after their first meaningful attack, which saw Jovetic clip the bar after Petr Cech spilled Yaya Toure's drilled shot.

Moments later, City were ahead. David Silva and Eden Dzeko combined quickly in a move that ended with Jovetic, on the overlap, quickly making amends for his previous miss.

Chelsea were set up in the same 4-2-3-1 shape that brought them success here last time out but there was no zip about them when they came forward and City always looked more likely to extend their lead.

Mourinho tried to change the direction of the game at the break, replacing Samuel Eto'o with £11m January signing Mohamed Salah, but both he and Fernando Torres, who was later introduced from the bench, made little impact.

Can Man City do it again?

Manchester City have played in two of the last three FA Cup finals. They won the trophy for the fifth time when they beat Stoke in 2011, but were beaten by Wigan in the final last season. They first lifted the FA Cup in 1904.

Chelsea did not lack effort but City matched their intensity and simply refused to allow them any space in attacking areas.

With the score at 1-0 the game remained in the balance, but that only lasted until the fit-again Nasri was brought off the bench after a five-week injury absence.

Nasri had only a handful of touches before making his mark after 67 minutes, running at the Chelsea defence, exchanging passes with David Silva, and tapping into an empty net from six yards out.

Joleon Lescott had another effort ruled out for offside before the end but it made no difference to the outcome, with Chelsea ending up well beaten.

City already go to Wembley once at the start of March for the Capital One Cup final and they are now just one game away from a return there in an FA Cup semi-final too.

Things do not get any easier for them from here, however. Mourinho may have been vanquished, this time, but Spanish title holders Barcelona are the next visitors to Etihad Stadium in the Champions League on Tuesday.