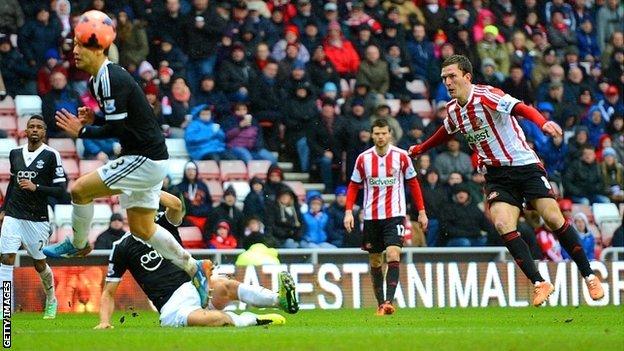 Sunderland continued their cup success this season as a much-changed side saw off a poor Southampton team to reach the FA Cup quarter-finals.

Gus Poyet's Black Cats have already reached the Capital One Cup final and they were rarely tested as Craig Gardner's fine strike settled the tie.

James Ward-Prowse had a shot saved for the Saints with Rickie Lambert missing an open goal from four yards out.

Sunderland's win came in front of only 16,777 fans at the Stadium of Light.

"Southampton out! No game midweek , great position in the league, why oh why would pochettino not play his strongest team .. Ridiculous! - Robbie Savage.

"Totally agree. Disrespectful of the competition, Saints supporters, especially those that travelled, and the game." - Gary Lineker

Lambert's missed opportunity summed up Southampton's afternoon as they failed to capitalise on a potential chance of silverware to add to an impressive Premier League campaign.

They sit eighth in the top flight after enjoying a six-game unbeaten run since the start of the year but Mauricio Pochettino still decided to make alterations to his team.

In contrast, Poyet's side had reason to take this tie less seriously given they are in the Premier League bottom three and face a League Cup final against Manchester City in two weeks' time.

With those targets uppermost in his mind the Uruguayan made nine changes to the side that lost last weekend at home to Hull, but Sunderland still showed greater willingness to press their opponents and support their team-mates in attack.

And in Gardner's 25-yard effort four minutes after the break, the hosts had the game's outstanding moment as they won for the seventh time in their past 10 outings.

Sunderland could have gone ahead in the first half when Fabio Borini appeared to be brought down by Luke Shaw just inside the box but the hosts' vehement penalty appeals went unheeded.

Saturday's match was the 61st between the two sides, with Sunderland's win over Southampton taking the head-to-head record to 23 wins each.

Overall, the first half lacked any real quality in the final third but that changed soon after the break when Gardner picked up Jos Hooiveld's loose clearance and smashed a shot in off the bar from 25 yards.

Pochettino threw on Rodriguez to try and inspire a response and Lambert should really have equalised from Nathaniel Clyne's low cross before Lallana missed another chance from the same supply line.

Sunderland boss Gus Poyet, after being reminded that former manager Bob Stokoe led the Black Cats to FA Cup glory in 1973 and was commemorated by a statue: "Apparently to be more famous, it's better to win the cup. I don't want any more people knowing me, I think they know me enough, so I would prefer to stay in the Premier League.

"It's a personal feeling. I can't answer for anybody else, it's me. I would be devastated if we go down, so it's me."

Assistant manager Jesus Perez on why Southampton made six changes: "Obviously, it was a tough game against Hull [on Tuesday], we played away as well, we came home late and some of our players were not fully recovered and we decided the best players to play today.

"For us, every single player is important and useful for us and it doesn't matter who is on the pitch.

"There was a lack of freshness, that's obvious, but nothing more."