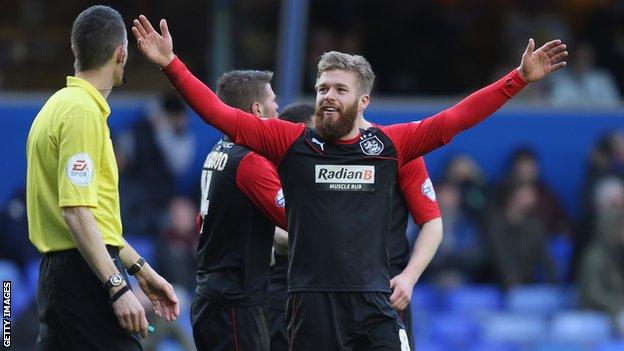 A wonderful goal from Adam Clayton helped Huddersfield to victory over Birmingham City.

Clayton showed good tenacity before thundering home from 25 yards as the visitors stretched their lead.

Both teams came into the game with a point to prove with Huddersfield having lost five of their last six away games.

They took the lead in just the 10th minute when a neat passing move culminated in Norwood running on to Ward's defence-splitting ball and placing a shot beyond home keeper Darren Randolph.

Huddersfield boss Mark Robins took over on 14 February last year. He has now guided the team to 20 wins in his 52 games in charge.

The home fans, some of whom had protested against the uncertainty surrounding the club off the pitch before the match, had little to cheer about in a first half low on chances and quality.

Manchester City loanee Emyr Huws should have forced visiting keeper Alex Smithies into action 10 minutes into the second half but he hit his curled effort from just outside the area straight at the Town number one.

Town won it with a moment of real quality from former Leeds man Clayton.

He took the ball in midfield, forced his way past Huws and then struck a fearsome dipping strike into the City goal.

Federico Macheda ought to have pulled one back but he miscued entirely from Chris Burke's cross before Lee scored a consolation with virtually the last kick of the game.

"That was probably our worst performance of the season and that's not taking anything away from Huddersfield, who played well.

"It looks like we have people who fear playing in front of their own supporters. It's outrageous. The fans have not turned on us.

"Their goalkeeper probably had his easiest day in football. You need to have home fans on the edge of their seats, we're not doing that. It's nonsensical.

"We try to convince ourselves about total football but that's not the British way. The fans want to see excitement.

"I put the big man Nikola Zigic on and we still didn't put balls in. Their defence and keeper must have not been able to believe their luck."

"I thought we controlled the game for long parts and deserved it but it would have been great to have the clean sheet.

"They are great lads, I really enjoy working with the group. They're young and I thought we were good and controlled the game.

"We'd like to be challenging for promotion. Are we there yet? No, not at all.

"We will try and get some run of games and wins against teams around us. They are all tough matches coming up, mid-table or not we want to catch the team above us."