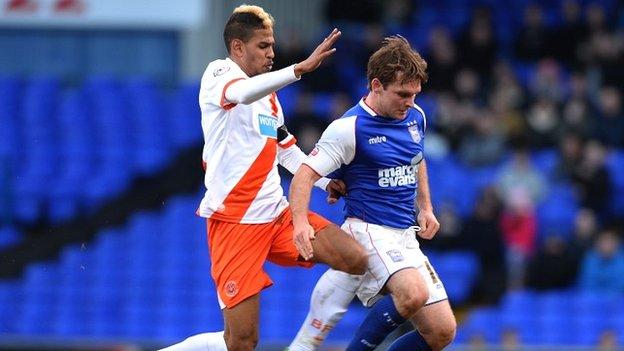 Ipswich missed out on a chance to move into the Championship play-off places as they were held at home by Blackpool.

Mick McCarthy's side failed to make an impression on the Tangerines, who are without a league win in 14 matches and are yet to replace Paul Ince as boss.

Blackpool's Faris Haroun twice came close to breaking the deadlock but his shots were saved by Scott Loach.

The stalemate means Ipswich are two points behind sixth-placed Reading, who play QPR on Sunday.

Blackpool are now winless in 15 games, having also been beaten 2-1 by Bolton in the FA Cup, and have only won one game since 2 November in all competitions.

But interim boss Barry Ferguson has drawn three of his five games in charge.

Ipswich were on top before Haroun's chances as Daryl Murphy was denied by Blackpool keeper Matt Gilks and David McGoldrick's header narrowly missed the near post after a Luke Chambers cross.

But Blackpool finished in the ascendancy as they increased their gap to the relegation zone to 11 points.

Ipswich Town boss Mick McCarthy: "We started really well, had the best chances but didn't take them. The game then developed into a scrap but the conditions were not great.

Blackpool interim player-manager Barry Ferguson on his future: "If I get the job, I really don't think I will be playing. People have done both jobs [at the same time] but I don't think I can do it.

"I made the decision not to play and stay on the sidelines, and the squad is becoming strong enough to cope. I am putting a new system in place and I want my team to be attack-minded. The commitment and effort has been there from the start, but in the games against Nottingham Forest and Ipswich we have also shown quality and belief."