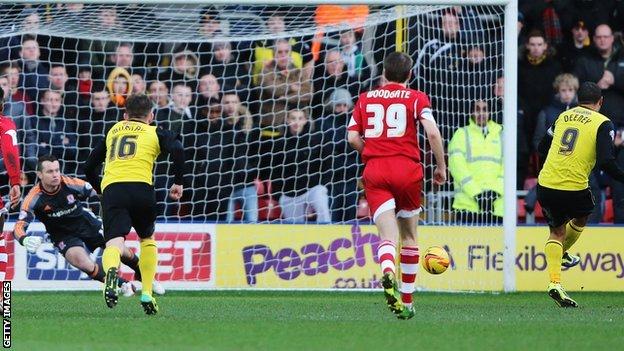 Watford made it 10 points from 12 after beating Middlesbrough in a game in which both sides finished with 10 men.

Troy Deeney put the hosts ahead with a penalty after Ben Gibson brought down Fernando Forestieri.

Watford then handed the initiative to Boro as Samba Diakite was sent off for a rash challenge on Dean Whitehead.

But Gibson was dismissed for a second booking after preventing keeper Jonathan Bond clearing the ball, before Watford saw out the game for victory.

The win puts Watford six points from the play-off positions, while Boro are a further two points adrift.

Striker Danny Graham, who netted 27 goals for the Hornets four seasons ago, had a chance to score against his former club after 28 minutes but chipped over the bar.

Boro then had the ball in the net only for Jonathan Woodgate's header to be disallowed for offside in a low key first half.

However, the game sparked into action after the break when Deeney confidently scored from the spot for his 14th goal of the season.

Diakite, who was making his full debut after joining on loan from QPR, was dismissed and, shortly afterwards, Gibson also made an early exit.

Watford contained any Boro threat and could even have extended their lead when substitute Ikechi Anya raced clear before shooting wide.

"I think if the referee sent them off they deserved to be sent off.

"What I did like was all the game, not part of the game, because my team were able to suffer.

"They work as a unit, as a team and I'm very happy about my lads."

"We lost the game because of our mistakes.

"We were losing but we were one man more and I thought with the three substitutes I had made we could change the score but, five minutes later, Gibson was sent off and the game was very, very difficult.

"The problem is the mistakes. It's not the mentality or the capacity of my players because we played at 100% like we played a lot of games in the past."