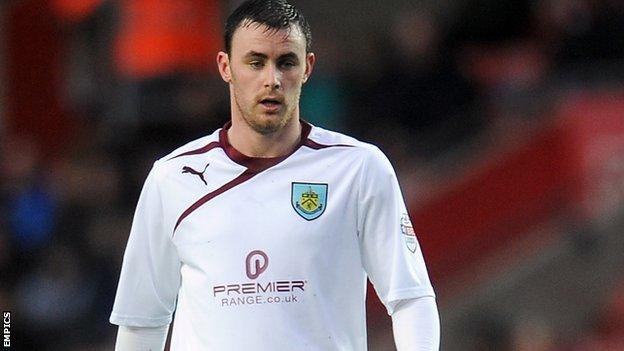 Promotion-chasing Burnley were held to a draw by enterprising Bournemouth for the second time this season.

After a tepid first half, the hosts went ahead early in the second as Ian Harte whipped in a corner which was deftly headed in by Tokelo Rantie.

Two Burnley substitutes then combined to equalise as Ross Wallace's cross was deflected into the path of fellow sub Keith Treacy, who rifled home.

And both sides had chances to win it in an end-to-end final 15 minutes.

Clarets keeper Tom Heaton got down well to his right to beat away a Lewis Grabban shot for a corner, from which home skipper Tommy Elphick's header was tipped over the bar by Heaton, before Cherries substitute Yann Kermorgant headed wide.

A grandstand finish - partly making up for a difficult first period which was played in driving rain - continued as Kermorgant curled a free-kick over the bar, substitute Ashley Barnes nearly conjured an opening for the visitors and right-back Simon Francis hit a powerful effort at goal which clipped the woodwork.

On a day when Burnley's Lancashire rivals Preston mourned Sir Tom Finney, the hosts shaded possession in a closely fought first half but struggled to create clear-cut chances as the visitors' back four dealt well with a series of crosses.

At the other end Clarets strikers Sam Vokes and Danny Ings, back where both began their careers, lacked service but showed glimpses of their progress from promising Bournemouth apprentices to the Championship's most prolific strike pairing.

It took 20 minutes for either keeper to be seriously tested as Heaton proved equal to a low 25-yard drive from Francis.

The South Africa striker had opened his Cherries account at Turf Moor in November and, having celebrated Valentine's Day by being called up for a date with Brazil in March, returned to haunt the Clarets once more.

Boss Sean Dyche substituted both wingers just after the hour, with Wallace and Treacy replacing Michael Kightly and Scott Arfield.

Cherries keeper Lee Camp had had little to do until then, but was left exposed when Treacy ghosted in at the far post to smash home the leveller.

It might have been harsh for either of them to lose it - but Howe's current charges will be the happier side, having matched his old team once more.

"All strikers need goals and Tokelo is no different. He is improving all the time and getting more confident - he has a bright future.

"We worked on that corner routine before the game so it was good to see it come off.

"It was a great delivery from Harte and good movement from Tokelo to get on the end of it. It is something we work on all the time and we had a refresher before the match."

"We were well below par but we have built an amazing mentality here so that when five or six players are not at their best we can still come away with a point.

"There was no sign of us wilting or going under after they scored and we limited them to few chances.

"It was nice for Keith to get a goal. It was a great run and a great finish.

"We want the players out of the side to be ready to come on and affect the game and they certainly did that."