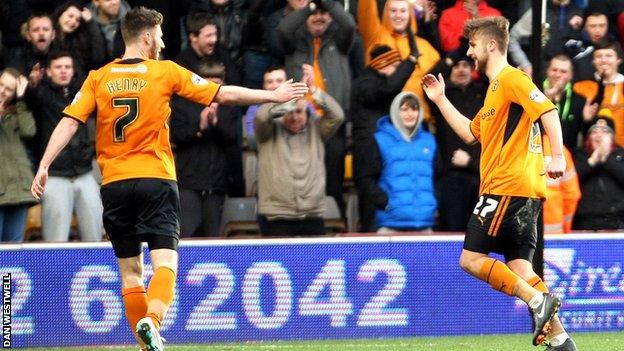 Michael Jacobs scored twice as Wolves eased past struggling Notts County to keep their League One promotion challenge on track.

Jacobs capitalised on Wolves' bright start to head in his first from Scott Golbourne's left-wing cross.

Jacobs made it two with a 25-yard strike, before Jack Grealish headed the visitors' best chance over late on.

The victory was second-placed Wolves' fifth in succession and kept them two points behind leaders Brentford, who were comfortable 3-1 winners at Crewe.

But they are now three points clear of Leyton Orient in third, and with a game in hand, after the O's were held to a draw at fellow promotion challengers Preston.

Notts County, who had not won a league game at Molineux since 1991, remain in the relegation zone, one point from safety.

"This is wonderful football club, but I feel disappointed we have not given them a game.

"I am concerned about the level of performances, on how we can go from Coventry last weekend to this one today.

"I just feel a little let down with what I have seen."