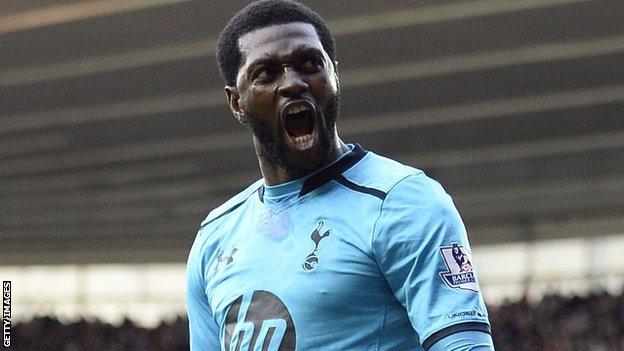 The Togolese forward was exiled from Villas-Boas's side during a poor run of form which eventually led to the Portuguese's sacking in December.

Adebayor disagreed with Villas-Boas's tactics and says he made his point during a training session.

"I have had a chance to play for a lot of top clubs in my career and I know how it's supposed to be.

"I told him one v one and he didn't want to listen, and then I told him in front of the group.

The former Arsenal, Manchester City and Real Madrid striker has since returned to the starting line-up under new Tottenham boss Tim Sherwood and scored six goals in 10 matches - a run he puts down to a desire to prove doubters wrong.

"I remember in early September when I went back home and did an interview saying it would not take me long to be the number one striker again in Tottenham, a lot of fans, not everyone, jumped on that [saying] 'Oh, who does he think he is," Adebayor told Sky Sports.

"When you wake up and you realise that there are a lot of haters out there and you want to prove them wrong, you just keep focused and keep doing what you love best, which is playing football, scoring goals and having fun."