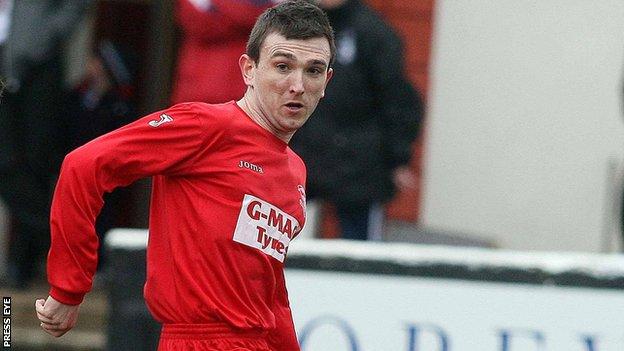 Queen's University are through to the Irish Cup quarter-finals for the first time after a comfortable 2-0 win over Distillery at New Grosvenor.

The Championship Two side went ahead when Bertie Fulton squeezed in from Aaron Thompson's flick-on.

Distillery's Darren Nixon saw his shot cleared off the line before Michael Allison made it 2-0 on 52 minutes.

Ryan McBride saved James Lavery's penalty but the ball fell to Fulton, who crossed for Allison to tap in.

The Whites were without manager Tommy Kincaid as he recovered in hospital after suffering a heart attack.

Allison also went close for the students while the goal-line clearance from Nixon's effort came early in the second half and before the second goal.

McBride fouled Stephen McDowell for the penalty but his save from the spot-kick proved to be in vain as Allison slotted home seconds later.

McDowell and Thompson had chances to add a third goal while the Whites failed to muster a response as Queen's set up a home quarter-final against Warrenpoint Town or Bangor.