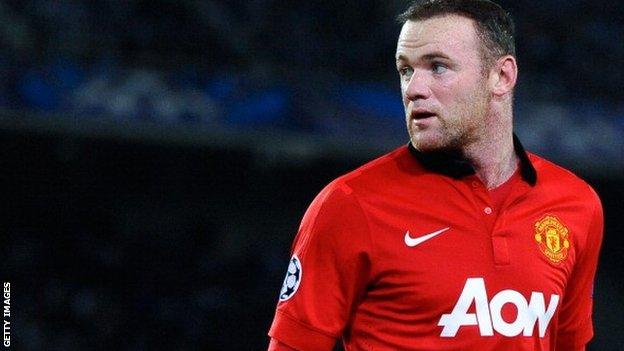 Manchester United striker Wayne Rooney has said it will be "extremely difficult" for his team to retain their Premier League title.

The defending champions, who face Fulham on Sunday, are seventh and 16 points behind current leaders Chelsea.

"Realistically, top four has got to be our aim," Rooney told Football Focus.

"Although we always want to win the league title, maybe it's a bit too far. We know it's going to be extremely difficult to win the title."

United have lost eight of their 24 league games this season in what is David Moyes's first campaign as manager since he succeeded Sir Alex Ferguson in the summer.

Rooney, 28, defended the Scot, who he played under as a teenager when Moyes was in charge at Everton.

"I worked with him at Everton and for a number of months at United. He's done everything he can, but it's the players that have to do better and hopefully we can do that."

Rooney, whose contract expires at the end of next season, was reluctant to talk about his future but did admit he had ambitions to surpass Sir Bobby Charlton's goalscoring record for club and country.

"It is a great aim for myself to try and get Sir Bobby's record, both at club and international level," said Rooney.

"It is something which I would like to do. If I can do that I would be really proud because it has stood for a long time."