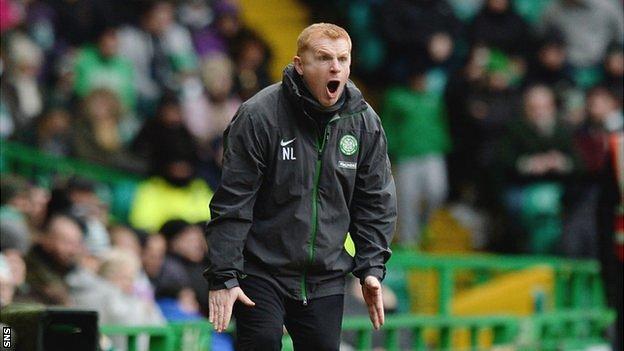 Manager Neil Lennon was left puzzled by his team's lacklustre performance in at home to resurgent Aberdeen.

Russell Anderson had pounced to level for the Dons after Anthony Stokes' early opener for the hosts before Peter Pawlett struck the Dons' winner.

"There was a flatness about our play and I don't know where that has come from," lamented the Celtic boss.

"We gave the players all the preparations needed."

And five minutes after the re-start, Derek McInnes's side, already in the Scottish League Cup final, moved ahead when Pawlett latched on to a pass by Barry Robson and beat the Englishman with an angled strike.

"We didn't play anywhere near to what we can," added Lennon.

"I can hardly single out any player, maybe James [Forrest] and Stokesy, to come out with any credit from the game at all.

"There was a lack of composure, particularly in midfield and at full-back. Our two centre-halves were poor today as well.

"We never really got a spell of pressure. [Virgil] Van Dijk missed a really good chance with the header. If that goes in it is game on again.

"We talked about set pieces all week. We knew that would be Aberdeen's strength and we didn't deal with it.

"We should have dealt with the first one comfortably. It's a header that we shouldn't miss and the second one was a panic clearance and that was symptomatic of our performance."

Lennon praised Aberdeen for their performance and suggested they could win both the League and Scottish Cups.

"You have to give them credit. They played well on the day or made us play poorly," he told BBC Radio Scotland.

"Going a goal down they showed a lot of character to come into the game but that is as poor as we have played here for a long, long time.

"Coming here and winning will give them a huge shot in the arm."

New signing Leigh Griffiths came on as a second-half substitute for Georgios Samaras, the former Wolves man's display described by Lennon as "lively", but generally the Celtic manager felt the Cup holders did not work Jamie Langfield enough in the Dons goal.

"We wanted to defend the Cup and to go out so early in both competitions is hugely disappointing," he added.

"I can factor in the League Cup because at the time we had the Champions League and we made some changes for that but there is no excuse for today.

"That was a poor performance and we all have to accept the responsibility and the criticism that will come with it."