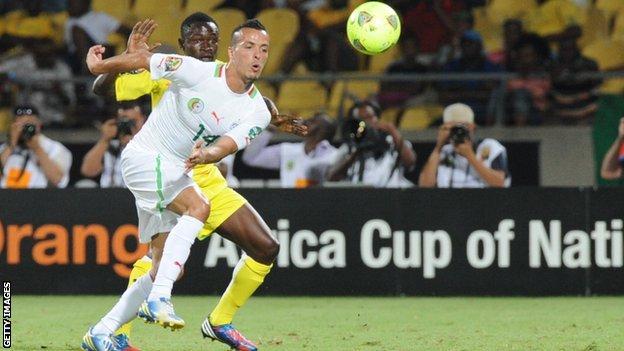 Algeria midfielder Foued Kadir is optimistic his side can progress from their World Cup group, provided they get off to a good start against group favourites Belgium.

The Desert Foxes then face tricky Group H opponents South Korea and Russia, as they aim to reach the knock-out stages for the first time.

Kadir, who started all three of Algeria's matches at the 2010 World Cup, is confident they can improve on previous finals appearances.

"Belgium are the group favourites and we know with the way things go in any tournament, the first game is very important," Kadir told BBC Sport.

"If we can get a good result against Belgium then our chances will quickly go way up.

"It's important that we get off to a good start, so we can face South Korea and Russia who share the same ambition as ourselves, because football experts have already given Belgium the first place."

In 1982, Algeria became the first African nation to win two matches in the same World Cup, but they failed to qualify from the group on goal difference after West Germany's 1-0 win over Austria allowed them both to progress.

Although, Algeria have not won a game in their subsequent two appearances in 1986 and 2010, Kadir believes things will be very different in Brazil this summer.

"The players are more mature and the group is full of players with international experience so it should be a different Algerian side in Brazil," he said.

"Our ambition is to try to get out of our group - that's the first objective and the collective desire [is there]."

The 30-year-old, who is on loan at Stade Rennes from fellow French side Olympique Marseille, insists African teams have a point to prove at the World Cup.

"Most of the players are playing at the top level and those in Africa are also getting top exposure.

"Who knows, this could just be the year for African teams to make a statement on the world stage."

Meanwhile, Algeria who face Slovenia in a friendly on 5 March at home, will play Romania in another World Cup warm-up on June 4 in Geneva, Switzerland.

An Algeria Football Federation statement further revealed that the North African side are expected to play another friendly in late March, but talks are still underway as they seek to finalise an opponent.