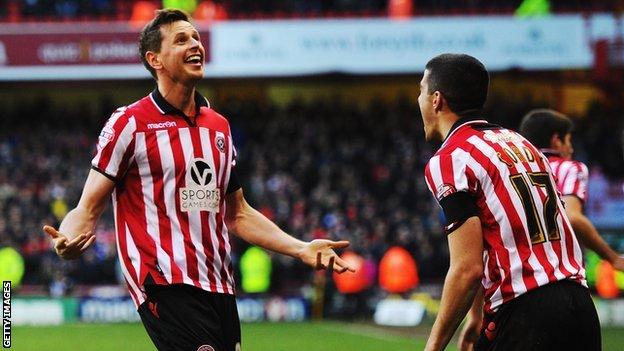 In front of a fervent crowd of 25,118, the highest at Bramall Lane this season, the League One Blades became the lowest-ranked side to reach the last eight of the competition since 1990 after stunning their Championship opponents.

Billy Davies's Forest side looked like they might extend their 16-game unbeaten run when they went ahead through Jamie Paterson's headed opener.

But the Blades equalised when Conor Coady tucked into an empty net after Dorus de Vries spilled John Brayford's cross.

With a replay looking likely, substitute Porter tucked in a penalty, and then caused pandemonium when he touched in a cross from winger Jamie Murphy.

That goal sparked a pitch invasion by some home supporters, who also took to the pitch at the final whistle. Police had to restore order after a section made their way towards Forest fans at the other end.

Despite those unsavoury scenes, it was a stunning finale to the game as Nigel Clough got the better of rival Davies and his team continued their superb cup run, having already beaten Premier League sides Aston Villa and Fulham.

The Blades will be at home against city rivals Wednesday if the Owls beat Charlton in their fifth-round tie, which was postponed on Saturday.

The differences between Clough and Davies have been well documented after their respective touchline battles when Clough was Derby manager - and they did not shake hands before kick-off.

On the pitch there were contrasts, too, as the Blades attacked down the flanks, primarily through the energetic Murphy. Forest were more narrow as they probed via Paterson, Andy Reid and Radoslaw Majewski.

Forest, though, were more composed in line with their unbeaten run. And they took the lead when Reid found space on the left and crossed for Paterson, who looped his header in at the near post.

Minutes before the goal, Jose Baxter wasted a great opportunity to open the scoring when his tame shot could not beat Forest goalkeeper De Vries.

And the Blades were cursing their lack of composure again before half-time when another fine Murphy run set up Baxter, who this time passed to Stefan Scougall but De Vries was equal to his well-struck effort.

Forest began to find their feet again around the hour mark and only two fine stops by Mark Howard prevented Paterson and Simon Cox from extending the lead.

But urged on by the news of a potential date with rivals Wednesday, the Blades continued to ask questions of the Forest defence and equalised when Coady took advantage of De Vries's error.

Reid, who was a thorn in the Blades side all afternoon, then tested Howard with a dipping free-kick.

But when Murphy's cross was handled by former Blade Greg Halford, referee Michael Oliver pointed to the spot and Porter kept his nerve from 12 yards.

He then tucked in Murphy's cross in stoppage time to seal a famous victory.

"In the second half it was complete and utter self-destruct. If you look at the goals we have lost it's individual errors without naming names. And then we give them a huge lift and then at the end they had more hunger. We wish Sheffield United all the very best.

"I've got no issue at all with regard to kick-off times and whether the draw is made before or after the game. I've no issue with Nigel Clough either. I wished him the best before the game."