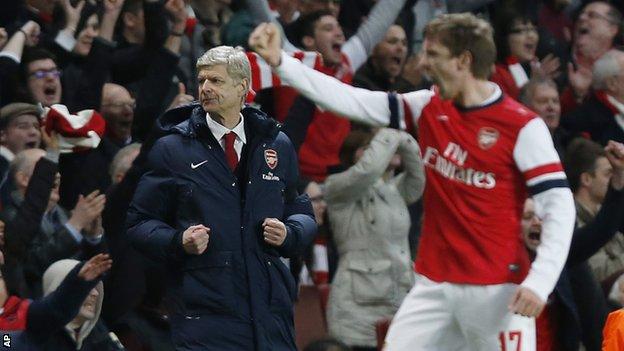 Alex Oxlade-Chamberlain scored one and set up the other as Arsenal earned a degree of revenge on Liverpool to reach the FA Cup quarter-finals.

The Gunners, thrashed 5-1 at Anfield in the Premier League last week, led when Oxlade-Chamberlain guided in a loose ball after 16 minutes.

The England winger provided the cross for Lukas Podolski to fire in from 15 yards at the start of the second half.

Steven Gerrard converted a penalty but Liverpool could not force an equaliser.

However, the visitors felt they should have been awarded the opportunity to level from the spot when Luis Suarez was sent tumbling inside the Arsenal area by Oxlade-Chamberlain. 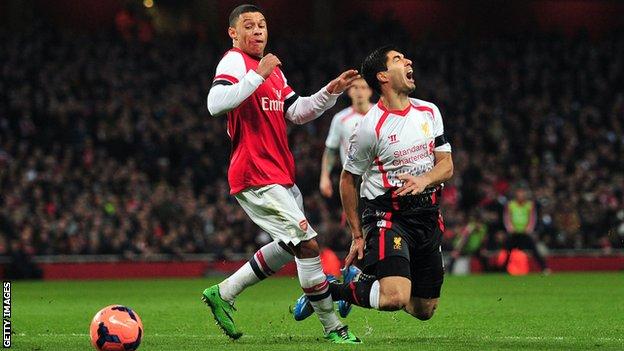 But referee Howard Webb, who will go to the World Cup this summer as England's top official, decided Oxlade-Chamberlain's clumsy challenge from behind was fair.

It meant the Gunners were able to survive a Liverpool onslaught and hold on for victory in a dramatic fifth-round tie at Emirates Stadium, booking a quarter-final date with Everton.

More pertinently, the win will serve to further restore Arsenal's confidence after their Anfield thrashing in time for the visit of Champions League opponents Bayern Munich on Wednesday.

Gunners manager Arsene Wenger claimed his side would react positively and, after they survived another rampant start from their Premier League title rivals, they responded in the manner demanded by the Frenchman.

Ties to be played 8/9 March

A much-changed home side had barely threatened in the opening stages before Oxlade-Chamberlain broke the deadlock.

He pounced on a loose ball in the Liverpool box, after debutant Yaya Sanogo's shot was blocked by Reds skipper Gerrard, to calmly steer past Brad Jones.

However, Arsenal were fortunate not to be already trailing as the Reds produced a high-tempo start, just as they had last week.

Brendan Rodgers's side should have led through in-form striker Daniel Sturridge, who was aiming to become the first Reds player to score in nine successive matches.

Inside the opening five minutes, Sturridge fired into the legs of Arsenal goalkeeper Lukasz Fabianski and then smashed into the side-netting after rounding the Pole.

Uruguay international Suarez, the subject of a failed £40m-plus bid from Arsenal in the summer, tested Fabianski twice either side of the break, before Oxlade-Chamberlain turned creator for Arsenal's second.

He raced past Daniel Agger down the right before picking out Podolski with an inch-perfect cutback.

Arsenal winger Alex Oxlade-Chamberlain has scored three goals and assisted once in his last three appearances for the Gunners at the Emirates.

But the German handed a lifeline to Liverpool when he clumsily fouled Suarez from behind in the area.

Gerrard confidently sent Fabianski the wrong way to halve the deficit with his eighth goal of the season - and it set up a grandstand final half-hour.

The match, which had already been an entertaining spectacle, exploded into life as Liverpool rediscovered their attacking rhythm and laid siege to the Arsenal goal.

Sturridge was denied by the legs of Fabianski after being picked out by Philippe Coutinho with a deft and perfectly-measured through-ball.

The Poland goalkeeper, making only his fifth start of the season in place of regular stopper Wojciech Szczesny, was rapidly emerging as Arsenal's hero and denied Liverpool again when he held Coutinho's angled drive.

However, he almost cost his side when he made his first mistake in the final five minutes. He tried to punch clear Gerrard's deep free-kick, but was beaten to the ball by Agger, who headed wide.

And that was Liverpool's last chance of a dramatic equaliser as Arsenal, who are aiming for their first silverware since winning the FA Cup in 2005, celebrated a priceless win.