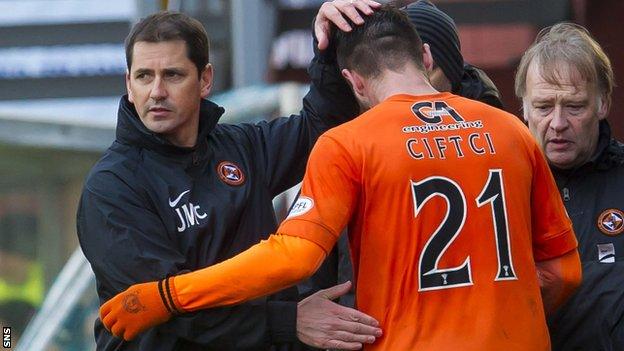 Jackie McNamara expects to face Inverness in the Scottish Cup after Dundee United drew the winners of the only undecided fifth-round tie.

Stranraer drew 2-2 with the Highlanders and those sides will replay at the Caledonian Stadium on 18 February.

United sealed their place in the last eight with victory over St Mirren.

"Obviously Stranraer and Inverness have still got to play but you would imagine that Inverness will come through that at home to Stranraer," said McNamara.

I'm pleased we managed to get through. It's important that we're in the next round. I think we deserved to be

"Happy to be in it first and foremost. Like any other manager, you're hoping for a home tie.

"So, it's another trip in the quarter-finals as it was in the League Cup for us.

"It'll be a difficult game up there as it was in the League Cup.

"Hopefully we can go there and make sure we get into the semi."

United lost that match 2-1 after extra-time and have not beaten Inverness in the Scottish Premiership so far this season.

Of the win against St Mirren, McNamara said: "I thought we were excellent. We had good energy in both halves.

"I'm pleased we managed to get through. It's important that we're in the next round. I think we deserve to be."

Buddies boss Danny Lennon conceded his side were not at their best but took heart from the performance of debutant Eric Djemba-Djemba.

"I thought the first 20 minutes he was trying to find his feet," said Lennon.

"But you can see the experience and the knowledge which he brings. He's got lovely soft feet.

"I thought him and Jim Goodwin dominated the game in terms of possession from when we equalised up until half-time."