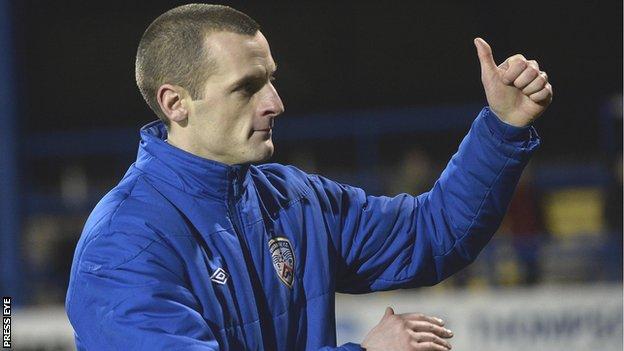 Coleraine boss Oran Kearney has been named the NI Football Writers' Manager of the Month for January.

After a ninth straight defeat, Kearney led Coleraine to a superb run of five games unbeaten, including an Irish Cup victory over Cliftonville

"There was a stage when I wondered if I would get the chance to win another one of these awards," he said.

"Losing nine league games in a row was devastatingly hard but the attitude of the players was terrific."

Kearney added: "We stuck together, that's the most important thing and now we have momentum. I've been in changing rooms that would not have survived but not this one.

"I feel I have maybe two seasons worth of experience under my belt in the past few months and it will give me more tools for the future.

"The whole of Christmas felt like make or break and it was a really tough time. We kept saying we had to draw the positives from our experience and I know I will be a better manager for it."