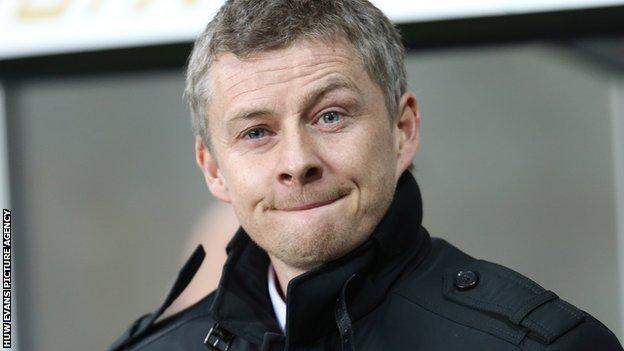 Ole Gunnar Solskjaer is confident his side can come back from a disappointing 3-0 derby defeat at Swansea to secure their Premier League status.

The result leaves Cardiff three points from safety in 19th.

They now face 12th placed Aston Villa at home on Tuesday night, a game that manager Solskjaer says is "massive" for his side.

The former Manchester United striker has won one and lost four of his first five Premier League matches since succeeding Malky Mackay as Cardiff boss.

He says the psychological impact of the derby defeat at Swansea, who were only three points above the Bluebirds before kick-off on Saturday, "can go both ways."

But the Norwegian is confident he will see a much improved performance on Tuesday.

"I think I'll get a reaction. A response," Solskjaer said.

"The dressing room looked downbeat of course, after a defeat against your worst enemy.

"But we've got a massive game on Tuesday against Villa who are also in a similar situation as us, so of course we've got to respond.

"I'm sure they will because of the character and the personalities in there. That's the way they are."

After the Villa game, Cardiff have home matches against Wigan in the FA Cup fifth round and Hull City in the Premier League.

Solskjaer says his side must also look to pick up three points against Steve Bruce's side if they are to climb away from the relegation zone.

"I've always said the Premier League is almost split into two different leagues and we're in the second one," said Solskjaer.

"We have two home matches coming up against Aston Villa and Hull, two other teams in this second league with us.

"We need to look to win those and give everyone a boost.

"There are lots of other games coming up against teams down there with us too.

"But it's no good me just talking about it, we've got to start collecting points before we run out of games."