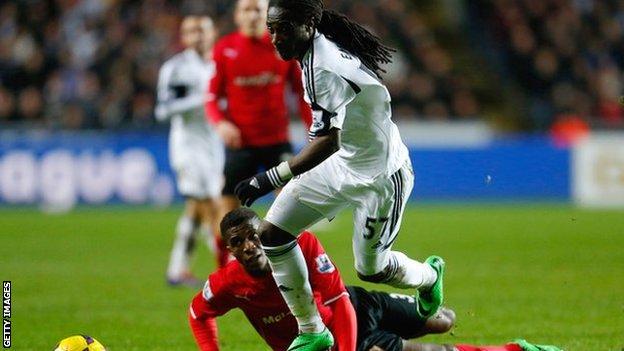 Swansea City's on-loan attacker Marvin Emnes says being back at the club is like returning home.

The 25-year-old made his first start since his deadline day move from Middlesbrough in the Swans' 3-0 derby win against Cardiff.

Emnes scored the winner against the Bluebirds during his last spell at the club and says he's glad to be back at the Liberty Stadium.

"I feel like I'm back home," said the Dutchman.

When former Netherlands Under-21 player Emnes was previously at Swansea Garry Monk was a player.

Monk has since been appointed manager of the Swans for the "foreseeable future" following the sacking of Michael Laudrup just days before Saturday's derby.

He's [Monk] been good to me from day one

The 34-year-old handed Emnes a place in the starting line-up in his first game in charge.

He impressed during an energetic and fast-paced first half, playing just behind striker Wilfried Bony, attacking the Cardiff end at pace.

Monk brought Emnes off at half-time as a precaution however, concerned about the Dutchman's hamstring.

His replacement Pablo Hernandez set up the opening goal with virtually his first touch and played a vital role in Swansea's win.

Emnes, who has scored just once this season for Boro, says he is happy to be reunited with Monk.

"He's [Monk] been good to me from day one," said Emnes, "from the first day I met him and I came to the club.

Emnes says training in the build-up to the derby had been "short, sharp and intensive".

After the Cardiff game Monk said this had been deliberate to focus the players on the match and not give them time to think about Laudrup's departure.

"It was something different for the players," said Emnes.

"He [Monk] speaks a lot to the players.

"He explains a lot. What he wants from you and how he wants you to play.

"I think that helps every player a lot."

The result against Cardiff saw the Swans move up to 10th in the Premier League.

But they are only four points above the relegation zone, in one of the most competitive seasons ever in the top flight.

Monk will be looking to follow up his winning start away at 13th placed Stoke City on Wednesday night.

Mark Hughes' side earned a dramatic draw at the Liberty Stadium earlier in the season and beat Manchester United in their last home game.