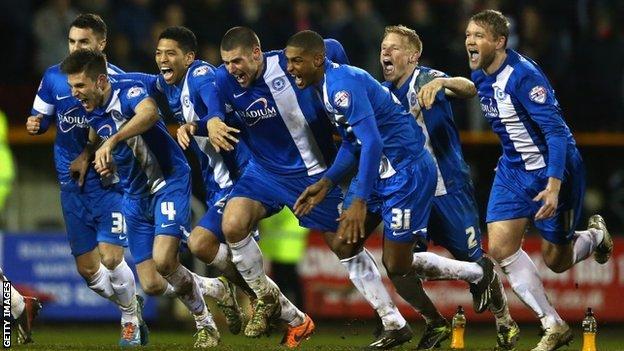 Peterborough beat League One rivals Swindon on penalties to reach the Johnstone's Paint Trophy final for the first time in their history.

The first leg had finished 2-2 and the spoils were shared again, as Britt Assombalonga's header cancelled out Alex Pritchard's first-half strike.

With no extra-time being played, the game went straight to penalties.

Massimo Luongo and Tijane Reis both missed for Swindon and Tommy Rowe scored calmly to send Posh to Wembley.

Peterborough threw away a two-goal lead in the first leg of the southern area final at London Road earlier this month and were second best to 2012 finalists Swindon until the final 15 minutes.

But Posh finished stronger and held their nerve to book a place in next month's final, where they will meet Chesterfield or Fleetwood.

Swindon enjoyed the majority of possession in the first half and had an early penalty shout when Dany N'Guessan went down in the box after Craig Alcock's challenge, but referee Keith Stroud waved away their appeals.

After fizzing an earlier cross-shot wide of the post, Tottenham loan midfielder Pritchard broke the deadlock when he smashed home from close range after Peterborough failed to clear their lines.

And Swindon almost doubled their lead straight after the break when N'Guessan beat goalkeeper Bobby Olejnik to the ball but saw his shot hit the foot of a post and spill wide.

But the hosts began to tire and Assombalonga found a gap in their defence to land a powerful header into the back of the net to level the score.

Luongo stepped nervously up to take the first penalty and put it well over the bar.

But Reis was unable to convert his effort, and it fell to Rowe to seal it for Posh.

"I thought we did enough to win the game. We missed the chance to go 2-0 up and kill the game.

"We made one mistake in the game and it led to the goal.

"The players gave everything. We played some good football but it wasn't to be.

"I think we had the better chances - you give Assombalonga one chance and he's going score."