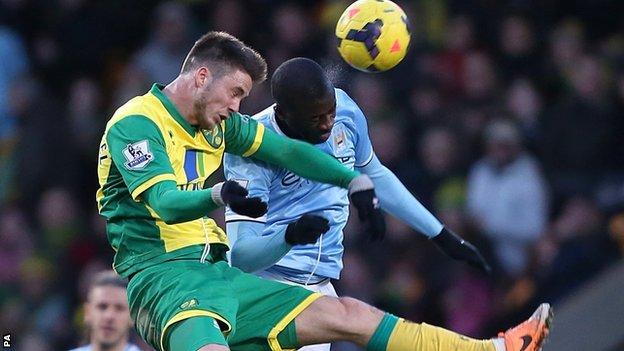 Toure, 30, faced a three-match ban after appearing to kick the striker.

But a Football Association panel of three ex-referees ruled that he should not be charged with violent conduct.

"The FA will be criticised for this decision but all they have done is listen to the recommendations of the three former elite referees who reviewed the footage.

"The same panel of referees are used for each incident that is reviewed and all three must answer 'yes' for the player to be charged.

"The system is designed to promote consistency but some may argue that on this occasion it has fallen short."

"Good to see Toure not getting suspended. Players like him belong on the pitch!" Van Wolfswinkel, 25, tweeted.

"Things happen on the pitch. But we all enjoy watching him play. So get on with it and enjoy the football. That's what it's all about."

Referee Jon Moss did not see the incident during the Premier League match at Carrow Road, but the FA can take retrospective action on the basis of video evidence.

Mourinho, whose side are two points above City at the top of the Premier League, said: "If he is not suspended the message is clear: you can do what you want.

"If the FA defends football he has to be suspended."

The FA's decision comes on the same day Cardiff striker Craig Bellamy was charged with violent conduct for a collision with Swansea's Jonathan de Guzman in Saturday's south Wales derby.

Manchester City, who are without injured midfielder Fernandinho, face Sunderland at Etihad Stadium on Wednesday.