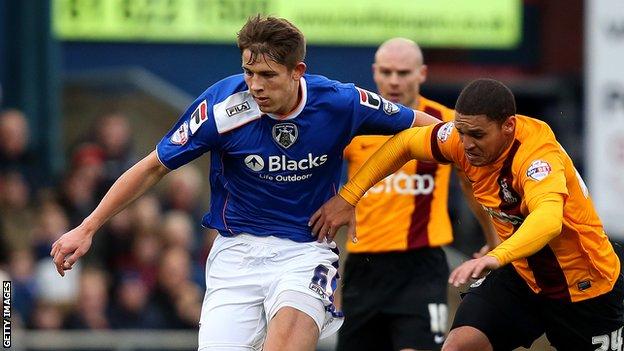 Manager Lee Johnson hopes defender James Tarkowski will return to Oldham on loan, despite Brentford initially blocking his move back to the Latics.

Tarkowski, 21, joined the Bees before the transfer deadline last month, with an agreement that he would re-join Oldham for the rest of the season.

But Brentford boss Mark Warburton says the player is required at Griffin Park.

"I'm still expecting him to come back on loan as there was a gentlemen's agreement," said Johnson.

"But he's their player. We've got no argument if they say he's staying there," he told BBC Radio Manchester.

Warburton, whose side are top of League One, told his club's website that injuries to regular centre-backs Tony Craig and Harlee Dean had forced him to keep Tarkowski in his squad.

"They [Craig and Dean] have done outstandingly well over the past two years and been in good form this season," he said. "James could have played for Oldham and maintained his match fitness.

"Now Tony has a problem with his hand, he has done great and managed it but we have to look at it. Harlee is on his way back from injury, he has been outstanding but we have to be aware of that.

"We have to make sure all bases are covered here and give ourselves the best chance in upcoming fixtures."