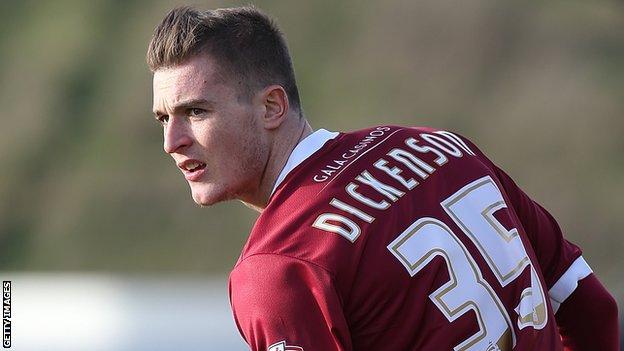 Northampton winger Brennan Dickenson hopes the fans will give the new-look side time to turn results around.

Chris Wilder has made six signings to try to lift the Cobblers off the bottom of the Football League.

Dickenson told BBC Radio Northampton: "There's 18 games left and a lot of points to be won.

"The fans have got to be slightly patient. There's a few who've come in and we're still trying to work together to form a team that can win games."

With the experience we have and the goals in the team, we just need to ignite the fuse

He continued: "If the crowd stay behind us - and they were great today [in the 2-0 defeat by Plymouth] - we'll push on and hopefully get out of the relegation zone," said the Brighton loanee.

"It wasn't the best home debut for me, but the weather conditions weren't that great and it made it very difficult for the boys to play how they would normally play," Dickenson added.

The Cobblers have won just once in their last 10 games in all competitions, but Wilder's appointment in late January have raised hopes of an improvement in results.

"We knew the task coming into the club and you can win three games in a week, so let's not panic yet," McSweeney told BBC Radio Northampton.

"I think everyone was optimistic and positive - and I still think they are now.

"The manner we conceded the two goals was very disappointing and that gave us a mountain to climb.

"We didn't make them work hard to score the goals and that's probably why we're down at the bottom of the league. That needs to be rectified very fast.

"If you concede goals like we have done today, and probably like they've done all season, you get in a rut and you find getting results hard.

"If we keep it tight at the back, I've got confidence that we'll get goals. With the experience we have and the goals in the team, we just need to ignite the fuse."