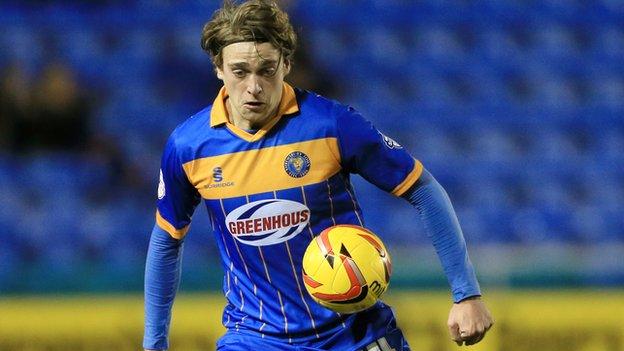 Shrewsbury Town loan striker Tom Eaves says there is dressing room support for caretaker boss Mike Jackson to be given the job at the Greenhous Meadow.

"We want to do it for him and hope he succeeds. All the lads are rooting for him," Eaves told BBC Radio Shropshire.

"Graham Turner was a fantastic manager. He gave me my big opportunity when I first came here on loan last season.

"It was unfortunate that he stepped down but there's no doubt in my mind that Jacko's the man to do it."

We're all backing him. We want to him to keep the job

Having taken over following the long-serving Turner's surprise resignation on 21 January, Jackson was initially given three games to prove himself, at the same time as the club began the interviewing process for their sizable array of candidates.

After a much-improved performance, but luckless outcome, to Jackson's first game in charge - the 3-1 defeat at Swindon - Town's next scheduled game, at Colchester, was then postponed.

That persuaded chairman Roland Wycherley to extend Jackson's period of caretaker charge to the end of February.

The initial response was a 1-1 home draw with League One leaders Brentford, thanks to on-loan Bolton Wanderers striker Eaves' last-minute equaliser - his first goal in over two months.

And he admits that the amount of individual coaching work Jackson still does with the Town players, counts for a lot.

"He's stuck by me, as he has done with a lot of the lads," Eaves said.

"He's spent a lot of time with me, doing extra bits and pieces after training. He's always looking to help people individually.

"We're all backing him, we want to him to keep the job."

Town are in deep relegation trouble after slumping to 23rd in League One following their 2-0 defeat by Sheffield United on Saturday.

They have taken one just point from a possible 18, ahead of this coming Saturday lunchtime's derby with Staffordshire rivals Port Vale.