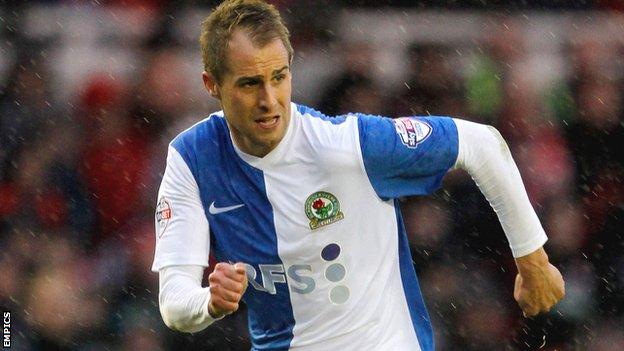 Luke Varney says he was happy to seal a loan move to Blackburn after "a week of turmoil" at parent club Leeds.

Massimo Cellino's takeover is close to being completed, while manager Brian McDermott was told he would be sacked and was then later reinstated.

The Championship club were also issued with a winding-up petition by shirt sponsors Enterprise Insurance.

"I was just delighted to get on the coach and realise it was a done deal," Varney, 31, told BBC Radio Lancashire.

"I've had a lot of conversations with the [Blackburn] manager [Gary Bowyer] and I was happy to get it over the line after a week of turmoil at Leeds."

Striker Varney, who made his Rovers debut as a substitute in Saturday's 0-0 draw at Middlesbrough, moved to Elland Road in the summer of 2012, but was keen to leave.

"Once it was made aware that I might not get a contract next year at Leeds, they stopped playing me and I understood I would have to move on," said the former Charlton and Blackpool man.

"I can put all that behind me now and use that negative - it's not anger - but there's a lot inside that I need to get out and I'm hoping to do that on the pitch for Blackburn."

Rovers boss Bowyer added: "He's someone we've been after for a while.

"He showed the fans what he's going to bring - some aggression, passion and some intelligent runs. He was keen to join us and we're delighted we've got it through."