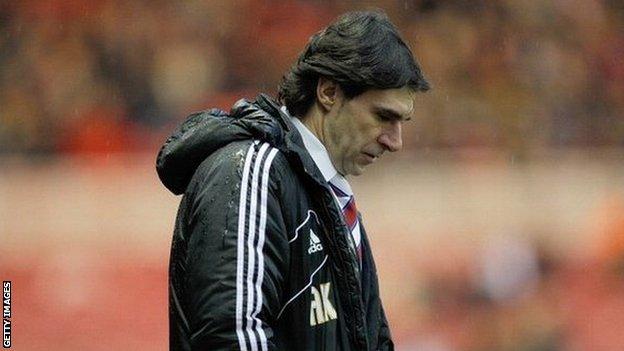 Manager Aitor Karanka has insisted on-loan striker Danny Graham has an important role to play in keeping Middlesbrough in with a chance of making the Championship play-offs.

Boro failed to score for a fourth successive league game in being held 0-0 at home by Blackburn on Saturday.

Karanka said Graham was working hard to learn the team's "style and intensity".

He told BBC Radio Tees: "When he has this he will be very important for us, we have to keep working with him,"

After scoring 14 goals for Swansea in the 2011-12 season, Graham has struggled since leaving in January 2013.

He failed to score in 13 appearances for Sunderland following his £5m move from South Wales during the transfer window.

A 20-game loan spell at Hull at the start of the following season brought only one goal.

But Karanka is confident Graham's touch will return.

"He has experience, he has - or he had - goals and I hope he will have goals here too.," he said.

Three consecutive goalless draws - against Blackburn, Doncaster and Wigan - preceded by a 2-0 defeat at leaders Leicester City, have seen the Teessiders slip to 12th in the table, eight points off the play-off places.

But Karanka said he was less angry with his players than he had been after the Doncaster match.

"Against Doncaster I was very, very sad and very, very angry, but [against Blackburn] I think the first half we played very well, we had a lot of chances.

"I'm not happy because I'm not happy when we don't win, but I am good with the team because, in the first half, they did all the things we told them."

The Spaniard said the play-offs were not in his mind.

"All I am thinking about is the next game, against Watford. Then we have two months, three months, to fight to win every game, and when we get to March and April we can see where we are."