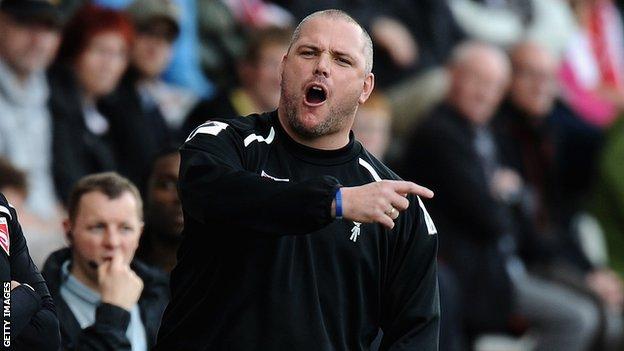 Manager Jim Bentley hopes Morecambe can rediscover some form and can avoid being dragged into a relegation battle.

The Shrimps are without a win in six games and are 13th in League Two, nine points above the relegation zone and nine points from a play-off spot.

"There are big clubs who are strengthening and having a go to get away from those bottom two positions," Bentley told BBC Radio Lancashire.

"If we'd have won on Saturday [against Burton] we would have been eighth."

We went nine games unbeaten and we're capable of doing that, but we're also capable of going six or seven without a win

The 37-year-old added: "We lost [1-0] and we're in the bottom half, and you're looking at how the teams at the bottom have got on.

"I want to be in eighth position, looking at how we can claw the next team back to us."

Morecambe made an excellent start to the campaign and occupied a top-seven spot for much of the first three months of the season.

However, their recent slump has seen Bentley's side drop into the bottom half of the table.

"While we're here, we'll give it all we've got. You can always upset teams.

"At half-time against Wimbledon back in October, we were top of the league.

"Unfortunately we conceded in the second half, but we went nine games unbeaten and we're capable of doing that, but we're also capable of going six or seven without a win.