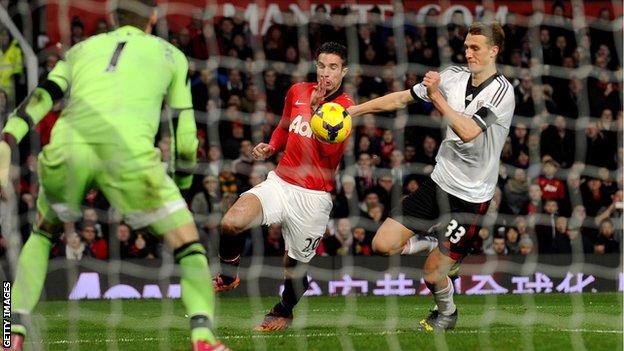 Fulham's Dan Burn said he had "never headed that many balls since the Conference" after defending 81 Manchester United crosses.

The number of crosses set a new Premier League record.

The 6ft 7in defender, who played 10 times in the Conference for Darlington in 2011, added: "We knew that was going to happen and I was happy for them to play like that."

Despite breaking the crosses record that had stood since 2006, only 18 found a player in red.

"I'm six foot seven so it helps when dealing with those sort of balls," added Burn.

"Manchester United still have amazing players - on another day they could have scored more often but we defended really well."

Later on Monday, Fulham published their own interview with Burn in which the defender said: "I didn't mean that quote to sound as disrespectful as it's been reported.

"There were a lot of crosses, statistically more than any game since stats started, so I just joked that I hadn't headed as many balls since the Conference."

Fulham sit bottom of the Premier League and host Liverpool on Wednesday, while United travel to Arsenal.