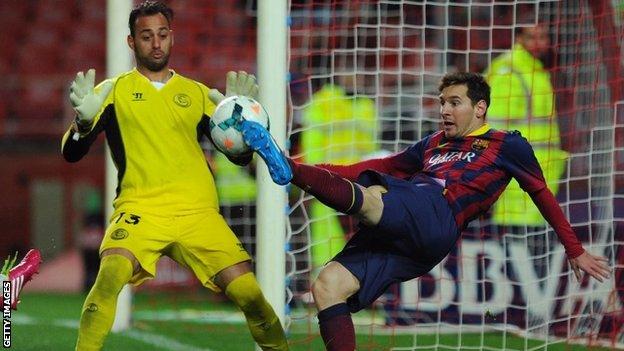 Lionel Messi's pride had been affected by negative criticism over his recent form, according to his Barcelona coach Gerardo Martino.

The four-time world footballer scored his first league goals from open play since September, with a brace in Barca's 4-1 win over Sevilla on Sunday.

Martino said: "Those that are negative do not realise they are affecting his pride.

"When you do that to the best player in the world, this is what happens."

The Argentine forward has had an injury-hit season, and was sidelined for two months with a hamstring problem. Upon returning he failed to score in his first three games before finding the net in the 3-2 home defeat by Valencia at the start of February.

"Leo never goes missing, he is one of the few players in the world that in a few seconds or in a few metres can turn a game. He does it all the time and he did it again against Sevilla," added team-mate Andres Iniesta.

Barcelona returned to the top of La Liga with the win - leading on goal difference from Real Madrid and Atletico Madrid.

On Saturday, Welshman Gareth Bale scored for Real as they defeated Villarreal 4-2, while Atletico suffered a surprise 2-0 loss at Almeria.