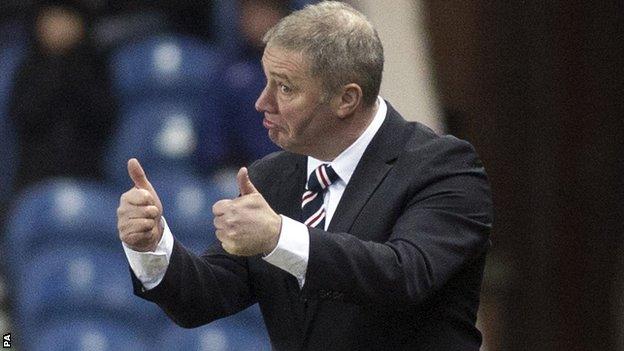 Ally McCoist has cooled suggestions Rangers are favourites to win the Scottish Cup.

in the fifth round and face Albion Rovers at Ibrox for a place in the semi-finals.

And McCoist believes that Aberdeen, having knocked out holders Celtic, are the likely winners in May.

"Some bookies might have us as favourites - as is their right - but I wouldn't go that far," said McCoist.

Aberdeen, having knocked the holders and the champions out, would probably be most people's favourites now

The League One leaders were in impressive form against Dunfermline at Ibrox on Friday.

However, McCoist believes there is little difference between his side and the Premiership clubs still in the competition.

Beating Celtic saw Aberdeen rewarded with a home tie against Dumbarton, St Johnstone face Raith Rovers while Dundee United are set for a trip to Inverness CT, should John Hughes's side overcome Stranraer.

"I'm not trying to play any mind games when I say this but I think Aberdeen and Dundee United will, in a lot of people's eyes, still have a slightly better chance.

"I counted us in the next band after Celtic and I still do. I don't think there's an awful lot between a lot of the teams there.

"But United beat St Mirren 2-1 and I watched St Johnstone three weeks ago when they beat Partick 1-0 and they weren't looking bad at all.

"You've got to say they had a fantastic result at Forfar and a lot of people would have been looking at that as a really tough fixture.

"We're in the mix but when you consider the other teams in there, I still don't think we're favourites to win the competition. I genuinely don't.

"You'd have to say Aberdeen, having knocked the holders and the champions out, would probably be most people's favourites now."