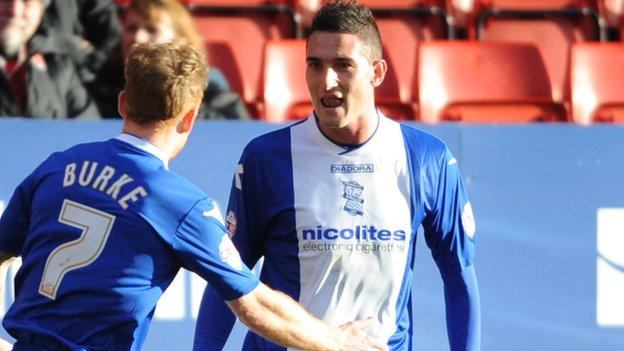 Having come off the bench to level late on against Derby on his debut, Macheda went one better, hitting both goals, in Saturday's 2-0 win at Charlton.

"We have a good team with great young lads," Macheda told BBC WM.

"With the quality we have, we look to finish as high as we can in the table."

Lee Clark's Blues, in 18th, are 14 points adrift of the Championship play-off places, having fallen away in the league since the turn of the year after a run of four games without a win.

But, at a time of renewed hope off the park, Saturday's success at Charlton for Clark's reshaped young side lifted them nine points clear of the relegation zone.

Macheda's exciting introduction to life in the Midlands echoed the young Italian's dramatic introduction to English football as a 17-year-old rookie at Old Trafford for United against Aston Villa in March 2009.

Coming on with half an hour to go, and United trailing 2-1, he enjoyed a dream debut, curling home a stunning right-foot shot to win the game.

And, just six days later, he scored another late winner, at Sunderland, to put his team back on course for the league title.

The irony is that those would prove to be his last goals for United for almost a year, so limited were his first-team opportunities.

Even after the departures from Old Trafford of Cristiano Ronaldo, Carlos Tevez and Dimitar Berbatov, the first team door has remained frustratingly closed.

Loans to clubs as diverse as Sampdoria, QPR, Stuttgart and Doncaster Rovers - where he scored three goals in his first two starts - have brought little lasting success.

"I have been at Man United for many years but I used to get on the pitch once or twice every month," Macheda said.

"So it is massive for me to play games.

"I try to score every game. I know it won't happen.

"I have no targets. I just hope the team does well."

Macheda admits that Blues' team spirit, which proved such an important factor in Saturday's 2-0 win at The Valley, was all the better for a good sing-song at the team hotel on Friday night.

And a late night exchange on Twitter revealed that Macheda was the star of the show.

"It was a bit embarrassing," he added. "But I can sing.

"I used to have a karaoke at home when I lived in Manchester. I used to sing three or four times a week.

"I did 'Impossible' by James Arthur and I was very impressive."