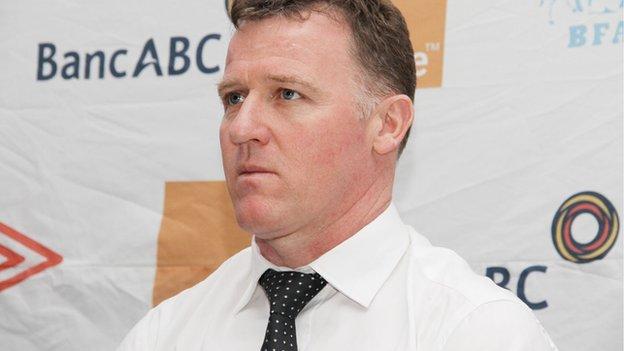 Englishman Peter Butler was unveiled as the new Botswana coach on Wednesday.

The former player, who had spells at West Ham and West Brom, is believed to have signed a two-year deal and fills the position left vacant since Stanley Tshosane was sacked last October.

He told BBC Sport: "I am really excited and looking forward to the challenge.

"There is a huge amount of talent here. I particularly want to recruit players from the Bostwana Premier League Under-20s - young players for the future."

After a four-month search for a new coach, the Botswana Football Association settled for Butler ahead of Uganda coach Milutin Sredojevic.

Botswana had narrowed their search to two coaches but could not agree terms with Serbian Sredojevic, whose asking price was reportedly US$25,400 per month month.

It is understood Butler has agreed to a figure of about US$8,300 per month - in the region of what Tshosane was earning under his deal signed after he became the first man to qualify the team for the Africa Cup of Nations - the 2012 tournament.

In an 18-year career as a player, Butler had spells at 10 clubs before going on to hold coaching positions in England, Australia and South-East Asia.

Botswana FA president Tebogo Sebego told BBC Sport: "Butler has the Uefa Pro Licence and has also been involved in coaching at developmental level and that's what we were looking for.

"He is as hungry for success as we are. He wants a challenge and his presentations have shown that he has a fire burning in him.

"In terms of targets, we want him to deliver a team that will get us beyond the preliminary stages of Cosafa.

"And for the 2015 Africa Cup of Nations, we are looking for him to deliver a positive display. Because of the short amount of time to prepare we don't necessarily expect to qualify for that tournament.

"But we want a positive impact in terms of attaining points and getting a respectable position in the group at the very least."