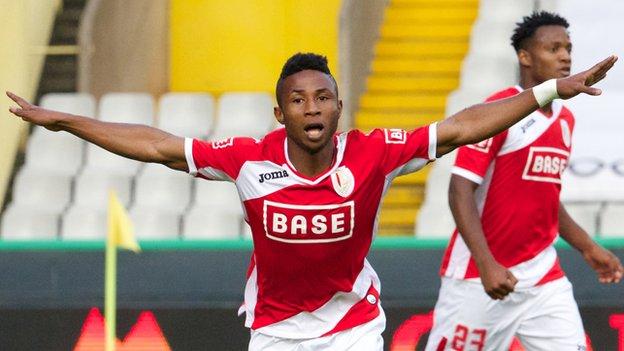 Nigeria coach Stephen Keshi has called up uncapped trio Imoh Ezekiel, Ramon Azeez and Michael Uchebo for the friendly with Mexico in Georgia, Atlanta on 5 March.

Highly-rated Standard Liege striker Ezekiel (pictured) looks to have been given a golden chance to force his way into Keshi's 23-man squad for the World Cup in Brazil in the summer.

Ezekiel, 20, with nine league goals this season, has been in superb form for Standard Liege and has caught Keshi's eye.

Belgium-based striker Uchebo, who has scored five league goals for Cercle Brugge this season, and midfielder Azeez are also knocking on the door.

With Newcastle's Shola Ameobi and Dynamo Kiev's Brown Ideye both currently struggling for form, former U-20 striker Uchebo could book his seat on the plane to South America.

Meanwhile, Juwon Oshaniwa is a less surprising name on Keshi's highly-anticipated list, as he has been involved more recently.

He was part of the Super Eagles squad that won the African Cup of Nations last February but has since been overlooked.

However, his recent form has also put him in the frame for a trip to Brazil.

All four players received their invitation letters two weeks ago, to enable them begin the process of obtaining United States visas.

The World Cup warm-up between Nigeria and Mexico will be played in Georgia Dome and AT&T Stadium in Georgia, Atlanta, and will kick off at 2030 (ET).

The Georgia Dome, one of the largest indoor sporting facilities in the United States, is the primary home of the NFL's Atlanta Falcons.