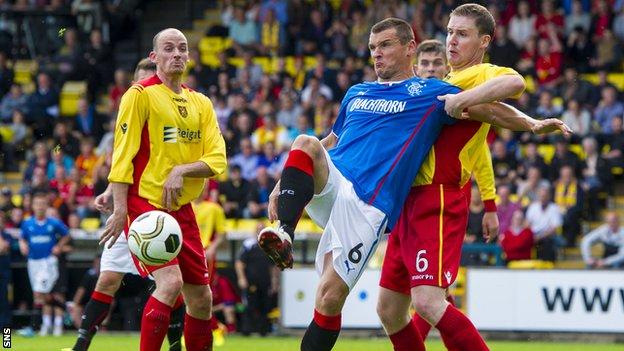 When Rangers met Albion Rovers in the Ramsdens Cup early this season, the teams had just swapped leagues.

Rangers had effectively replaced the relegated Coatbridge outfit in the third tier of Scottish football.

But July's 4-0 win for Ally McCoist's under-strength team demonstrated a gulf in quality on the park, while the switch of venue to Livingston underlined the different realms in which these clubs operate.

Now these worlds collide again as they prepare to meet at Ibrox next month with a place in the Scottish Cup semi-finals at stake.

There may only be one division separating the sides but their respective campaigns make for a stark contrast.

Rangers are coasting at the top of League One, unbeaten and victorious in 22 of their 23 games. Albion Rovers are seventh in League Two, with 31 points from 23 games.

So, Rangers have picked up more than double the points on offer.

Sound of the Crowd

Albion Rovers experimented with a "pay what you can" scheme in January, with a crowd increase of 125% and gate receipts up 160%.

Supporters and visiting fans were asked to fork out what they could afford for a ticket, with a minimum £1 entry. The attendance for the 1-0 win over Montrose? 718.

The mean league crowd at Cliftonhill this season has been 420, so the Wee Rovers players might want to wear earplugs when they get to Ibrox - with 42,844 turning up on average this term.

So, Rangers have more than 100 times the home support.

Show us your Medals

Rangers have lifted the Scottish Cup on 33 occasions, the last of those triumphs coming in 2009.

Albion Rovers have never won it, although they did get to the final in 1920, losing out to Kilmarnock 3-2 in front of a 95,000 crowd at Celtic Park.

And how did they get there? Well, they beat Rangers in the semi-finals after a second replay.

The Rovers trophy room has plenty of room for expansion, with two title successes from Scotland's lowest tier to their name.

Rangers' silver polish bill is much higher, having celebrated 55 league-winning parties, 27 League Cups and a European Cup Winners' Cup as well as those Scottish Cup victories.

So, Rangers have won 58 times the number of trophies (sorry, the Lanarkshire Cup doesn't count).

Show us the Money

Nicky Law, who scored twice in July's 4-0 win, earns more in his weekly wage packet than the whole of Rovers' part-time squad put together. The Ibrox salary bill is estimated at between £6m and £7m per annum.

When Albion Rovers won promotion to Division Two via the play-offs in 2011, players were reported to be picking up £50-a-week.

Rangers are currently listed as second favourites for the Scottish Cup by the tournament's sponsors, with odds of 10/3. You can get 200/1 on Albion Rovers, who haven't been this far in the competition for 80 years.

The bookmakers are seldom wrong but football can always throw up a surprise.

After all, Rovers took care of Premiership Motherwell in the fourth round, thanks to a last-minute shot from Gary Phillips. And Philips was on target again as Stenhousemuir, from League One, were beaten 2-0 on Saturday.

Rangers swept aside Dunfermline to reach the last eight and knocked out Falkirk in the previous round but they have suffered a cup shock this season, losing after extra-time to Forfar in the League Cup.

July's head-to-head in Livingston was the first one in more than 30 years, with the last Scottish Cup clash between the sides ending 6-2 in Rangers' favour back in 1982.

The last time the teams met in the same league was in season 1948/49, with Rangers winning 4-1 and 3-1 in what was the highest of two divisions.

But, of course, Rovers can draw on that prolonged Scottish Cup semi-final from 1920 for inspiration and one solitary league success three years later.

The great Rocky Marciano was born in 1923 and Rovers will need to summon the strength and courage of the legendary boxer to stand any chance of going the distance at Ibrox.

Those in charge of the Albion Rovers website wrote on Saturday: "Match report to follow. We're off to the pub!"

In the event of a highly unlikely away win in the next round, that website may take a day or two to update...