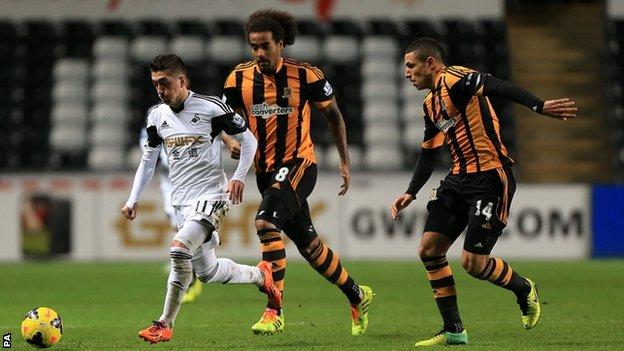 The trio all played in Hull's 2-0 win at Sunderland on Saturday - a game watched by England manager Roy Hodgson.

Huddlestone has won four England caps, his fellow midfielder Livermore one, while centre-back Davies is uncapped.

Bruce said: "Who am I to do Roy's job? But there's always a shock. I wouldn't be surprised if one of them sneaks in."

9 - the number of goals Hull have conceded at home, the same number as Chelsea, Manchester City and Liverpool. Only Arsenal have a better record (six).

12 - Hull have scored 12 of their 25 league goals this season inside the first half-hour of games.

25 - Tom Huddlestone and Ahmed Elmohamady are the only players to have featured in all 25 of Hull City's league games this term.

Huddlestone and Livermore were both signed from Tottenham last summer, the latter on loan, while Davies joined from Birmingham City for about £2.25m.

They have helped newly-promoted Hull climb to 11th in the Premier League table, with 27 points from 25 games and they face a home game against Southampton on Tuesday night.

"Huddlestone and Livermore have had a sniff of the England set-up before and since Curtis Davies walked through the door he's had a wonderful first season with us," added Bruce.

"All they can do is keep playing well and keep knocking on the door. There's always one or two shocks, there's a long way to go before the World Cup and injuries can set in.

"They'd never let you down. They've got a great attitude and a good work ethic - those three, in particular, ooze it."