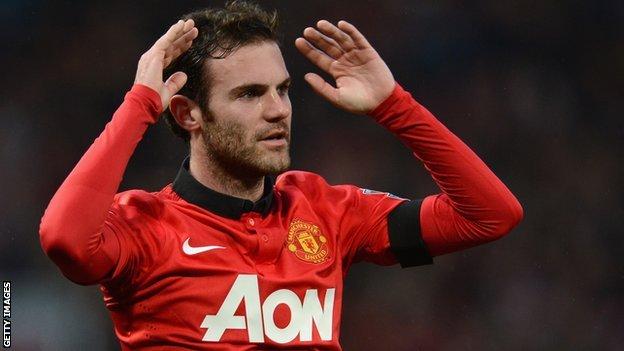 The Old Trafford outfit drew 2-2 with Fulham on Sunday in a game in which they had 75% of possession and sent in 81 crosses.

Mata, who signed from Chelsea last month for £37.1m, insists the Old Trafford side need to be more clinical.

"We have to improve our shooting accuracy because we got many times to the box and could have scored more than two goals," Mata wrote in his blog.

"It seems that luck is not on our side, but I don't like to give excuses."

The results left defending Premier League champions United in seventh place in the top flight and nine points behind fourth-placed Liverpool in the chase for a Champions League place.

"I'm sure we will make it, but there are less and less games to play so the sooner the better," added Mata.

United visit Arsenal on Wednesday and the Spain international has scored four times in four starts against the Gunners, including a goal in a Capital One Cup win for Chelsea earlier this season.

"The week at the training ground was really good. I know my team-mates better and I feel a great atmosphere in the dressing room," said Mata.

"I hope we can show that on Wednesday against Arsenal. It's a very tough game, but I have good memories from my last visit to the Emirates a few months ago and I hope I can enjoy a good game as well.

"The way to carry on is to stick together, the team and the fans, learn from mistakes and be positive, and we will show the character this team has always had."

David has found it difficult, but given time, with the experience he's got, he will turn it around, I'm convinced of that

Moyes has struggled since taking over from Sir Alex Ferguson last summer, with United having won only 12 of their 25 league games.

"It's particularly tough for David but ,make no mistake, they'll turn it around," said Bruce.

"Even the really top-class managers like David need time to stamp their authority on it.

"All of us in the game knew that whoever was going to follow Sir Alex was in for a difficult time.

"David has found it difficult, but given time, with the experience he's got, he will turn it around, I'm convinced of that."