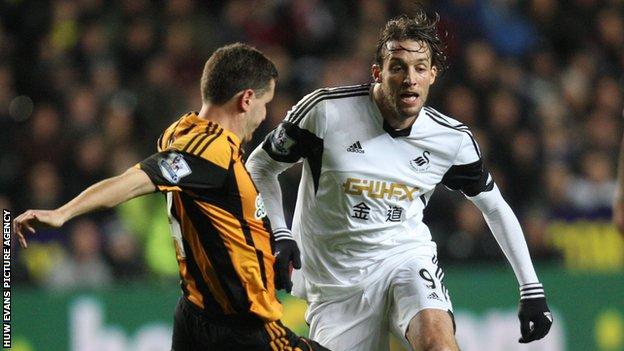 The 27-year-old has been sidelined since having ankle surgery at the end of December.

Swansea head coach Garry Monk said the Spaniard had been forced to sit out of training because of a swollen ankle.

"He didn't train today [Monday] but maybe he could play some part tomorrow [Tuesday]," Monk said.

Michu, Swansea's top-scorer last season, has not featured since the 1-1 draw at Norwich City on 14 December.

Monk, who replaced Michael Laudrup as manager, is keen to have Michu back in action as Swansea look to ease any relegation worries.

"I've had good chats with Michu and whatever his decisions are in terms of training, we'll build it around him," Monk added.

"He's a massive player and any player like that in your squad adds to the quality and gives everyone around a boost.

"It's important to have players like that within your squad because it pushes other players that are in those positions.

Midfielder Jonjo Shelvey is also currently sidelined with a hamstring injury but Monk is hopeful the England international will not be out of action for an extended period.

Victory at the Liberty Stadium put Swansea four points clear of the relegation zone but Monk has not set his players a points target.

The former Southampton defender is taking each game at a time, starting with Wednesday's trip to Stoke.

"The only target I've given them is to try and win the game on Wednesday.

"It's no good doing it for one game or two games. You have to do it for every single game."