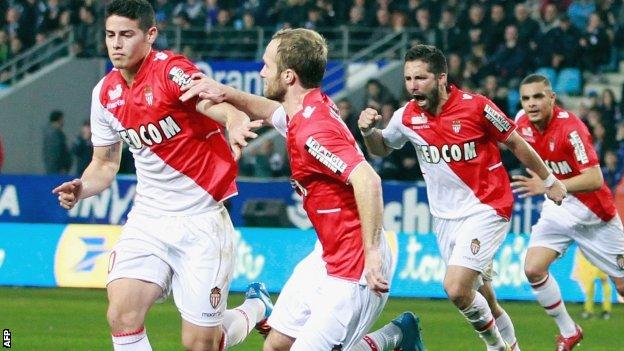 James Rodriguez scored both goals as Monaco moved back to within five points of Ligue 1 leaders Paris Saint-Germain with a win at Bastia.

The Colombian scored in both halves as Monaco won for the first time in three matches to keep alive their faint title hopes in the French top flight.

His second goal came as he latched on to Valere Germain's pass before finishing calmly inside the far post.

Rodriguez, who signed from Porto with Joao Moutinho in May for a combined fee of £60m, was recalled to the starting line-up after being on the substitutes bench for Wednesday's French Cup tie at Nice.

And it proved a masterstroke by manager Claudio Ranieri, who was without former Tottenham, Manchester United and Fulham striker Dimitar Berbatov because of a knee injury, as they inflicted just a second home season loss on Bastia.

Ex-Liverpool striker Djibril Cisse, had the best chance for the hosts in the first half but couldn't direct his headed effort on target from Julian Palmieri's corner.

An uneventful opening period came to life on 45 minutes when Rodriguez drilled home a free-kick from 20 yards, having been fouled himself.

The contest was effectively ended when Rodriguez advanced unchallenged towards goal before firing home his fifth of the season.