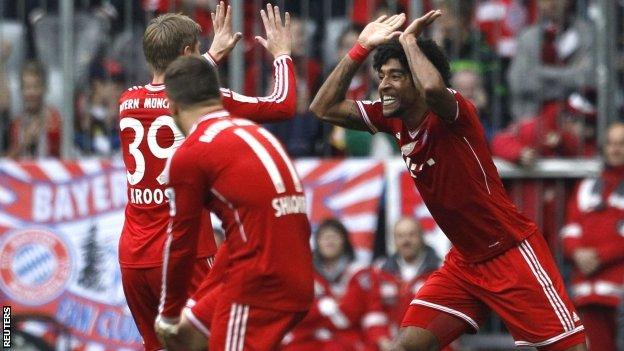 Xherdan Shaqiri scored twice in Bayern Munich's victory over Freiburg but will miss Wednesday's Champions League trip to Arsenal after picking up an injury.

The Switzerland midfielder, 22, limped out just after the hour-mark and Bayern later confirmed he has a thigh problem.

Shaqiri is not expected to return until after Bayern's Bundesliga match against Hannover on Sunday 23 February.

Dante put Bayern ahead before Shaqiri's brace and Claudio Pizarro wrapped up the win two minutes from time.

The European and German champions had rested other key players ahead of the last-16 first-leg tie at Emirates Stadium but still eased to extending their unbeaten league run to 46 matches.

Can they remember what a league defeat is like?

Boss Pep Guardiola has not lost a league match since 21 April 2012, when Barcelona were beaten 2-1 by Real Madrid.

Bayern's last Bundesliga reverse was in October 2012, a 2-1 home defeat by Bayer Leverkusen.

Bayern went into the game in control of the Bundesliga title race, having been 13 points ahead of nearest challengers Bayer Leverkusen before the weekend's round of matches.

Freiburg were fourth from bottom of the table but are one of just two teams to take any points off Bayern this season, holding them to a surprise 1-1 draw when the teams met in August.

Manager Pep Guardiola obviously had eyes on the return of the Champions League in midweek though as he started with Thiago Alcantara, Mario Gotze and Jerome Boateng among the substitutes.

Any fears of a repeat upset were quickly dispelled when Brazil defender Dante headed Contento's free-kick into the net from the centre of the penalty area before the 20-minute mark.

Shaqiri doubled the lead when he converted from a difficult angle on the left and the game was effectively ended as a contest before the break with his simple finish from 10 yards after Toni Kroos's pass.

The scoring was completed late on when Pizarro finished with his right foot from 10 yards, following Mario Gotze's pass.

Dutch winger Arjen Robben made only his second start for Bayern since returning from the knee injury he sustained at the end of November last year.

Bayern remain on course for a second successive treble of domestic league and cup and Champions League, having reached the semi-final of the German Cup with a win over Hamburg in midweek.