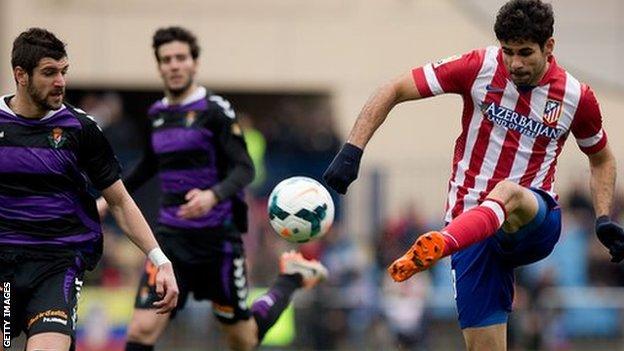 Atletico Madrid scored two goals in a minute against Real Valladolid to return to winning ways and keep their title challenge on track.

Diego Simeone's side lost in their last league outing, but were 2-0 ahead in the opening four minutes against Real.

Defender Diego Godin added the third with a header.

The victory moved Atletico clear at the summit although Barcelona replaced them at the top a few hours later after thrashing Rayo Vallecano 6-0.

Nevertheless the result was the perfect response to critics who had suggested Atletico's title charge was faltering after they won just two of their previous five league games.

Real, who are three points from safety with 14 games remaining, were blown away by Atletico's strong start.

Garcia found the net with a low shot into the corner - the 27-year-old's seventh league goal of the season - after Koke had touched a free-kick into his path.

Atletico's fans were still celebrating when Costa doubled the lead after running on to the ball and lobbing goalkeeper Diego Marino.