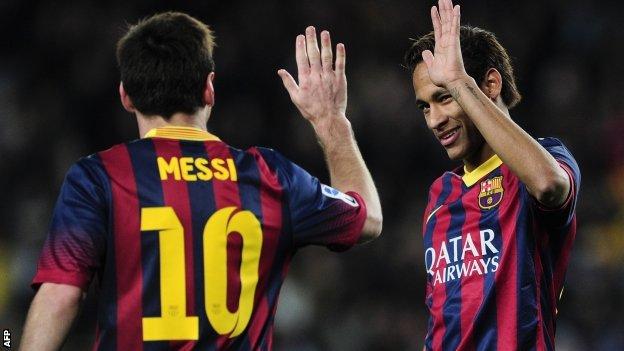 Lionel Messi scored twice as Barcelona prepared for Tuesday's Champions League trip to Manchester City by returning to the top of La Liga with a stylish win over Rayo Vallecano.

Left-back Adriano curled in the opener before Argentina's Messi lobbed in.

Alexis Sanchez latched onto Messi's pass to score after the break before Pedro converted a slick move.

Messi scored his second from 15 yards before substitute Neymar scored from long range on his return from injury.

He has now scored five goals in three games for the defending La Liga champions and looks to be returning to top form, after an injury-hit season, ahead of their last 16 Champions League meeting with Manchester City in midweek.

Barcelona also look to be hitting form at the right time as they dispatched struggling Rayo Vallecano with ultimate ease to return to the La Liga summit.

Atletico Madrid's 3-0 win over Real Valladolid earlier in the day had temporarily put them top but Barca moved back ahead of Diego Simeone's men on goal difference.

Real Madrid can move back level on points with both their rivals with victory at Getafe on Sunday.

Adriano got Barcelona off to the perfect start when he curled home the opener inside two minutes, before Messi and Pedro struck the post.

A sublime lob from Messi doubled Barca's lead before half-time and he then teed up Alexis Sanchez to calmly make it three after the break.

A brilliant backheel from Andres Iniesta then freed Cesc Fabregas inside the area and he unselfishly squared for Pedro to slot home from close range.

Messi scored his second as he slotted Sanchez's pass into the far corner, before substitute Neymar fired a stunning 25-yard strike into the top corner in his first game in three weeks.