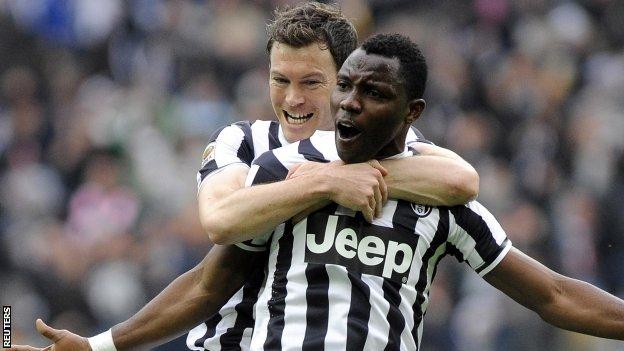 Juventus maintained their 100% home league record as they extended their Serie A lead to 12 points with a comfortable win over Chievo.

They have won all 12 of their home league matches this season but Roma could reduce the gap at the top to nine points with a win at home to Sampdoria on Sunday night.

Martin Caceres had put through his own net to give Chievo hope at 2-1.

Third-placed Napoli won 2-0 at Sassuolo, who dropped to the bottom after Catania surprisingly overcame Lazio 3-1, to close the gap on Roma.

Asamoah's left-footed shot from outside the area, after Fernando Llorente's pass, gave Juventus the early lead.

It was doubled before the half hour mark as Claudio Marchisio bundled home from close range.

Caceres's own goal gave the visitors brief hope after the break but that was extinguished soon after when Llorente headed home Andrea Pirlo's corner.